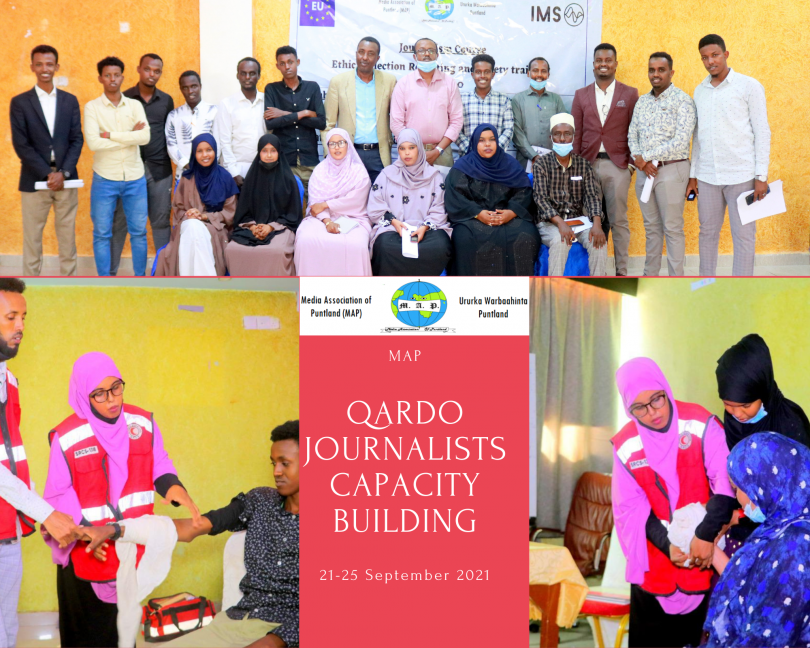 Qardho, Sunday September 26: Ahead of the expected one-person-one vote for district councils elections on October 25, with early elections to be held in the towns of Ufeyn, Qardho and Eyl, the Media Association of Puntland (MAP) concluded on Saturday 25, a five day training on safety and ethical election reporting for 20 journalists in Qardho town in partnership with the International Media Support under the project “Opening Civic and Democratic Space: Civil Society and Media Together” supported by the EU delegation to Somalia and SIDA.

This intensive journalism course aimed at equipping journalists with the vital skills and knowledge on know-how of efficient ethical reporting and personal safety in the context of elections in the Puntland – ahead of the upcoming local district council elections. This training is the second of 3-planned workshops that will benefit 60 journalists in Puntland.

Present at the opening session of the training was the MAP chair – Mohamed Dahir Warsame,  Qardho Mayor Mohamed Farah Seed, TPEC member Abdullahi Farah Mire, and the Puntland State spokesperson Jama Yusuf (Deperani) – whom gave keynote speeches on the role of the media in the society and most importantly on its role covering the expected 1-person-1-vote  local district councils elections set for the October 25, 2021.

Mohamed Dahir, MAP chair, welcomed the guest speakers and the participants, and gave brief on the objectives of the training. He spoke on MAP’s commitment in ensuring that the Puntland media play a vital role in covering the upcoming historic local council’s elections through capacity building 60 journalists altogether working in the towns of Bosaso, Qardho and Garowe, but also by inking agreements with TPEC on the journalist’s code of conduct signed last May.

‘’Puntland is at crossroads and hopes are high that democratization process will succeed, the fact that citizens will cast their votes to decide their municipality representatives with polling to set to start this October 25 is historic, Media’s role has never been vital, we need to perform at our best, I urge the mainstream media to be vigilant, professional and tailor contents that contributes towards the advancement of the democratization process’’

He added, ‘’today in Qardho we are opening this 5-day long course that seeks to sharpen the skills of the participants in ethically covering elections, understanding the risks that surround their work and how to mitigate and finally we go through the code of conduct and will hand out copies to all participants’’ said Mohamed Dahir – MAP’s chair

On his side the town Mayor Mohamed Farah Seed, the guest of honor in his speech thanked MAP for bringing the election training for local journalists and urged the participants to take advantage of the opportunity which in turn will benefit the public through the news reports produced as a result.

The lead facilitator, Burhan Abdi, a seasoned trainer with support from a first-aid certified training executed the 5-day course that covered the core topics ranging on how journalists should take safety precautions when covering elections, understanding the Puntland municipality electoral model and Planning the election coverage, ethics in journalism, Puntland journalists code of conduct, risk assessment and situational awareness and medical first aid training – among others.

MAP team coordinating the implementation of this state-wide journalism course will now be traveling back to the base – Garowe to implement the final training that will benefit the third batch of 20journalists.