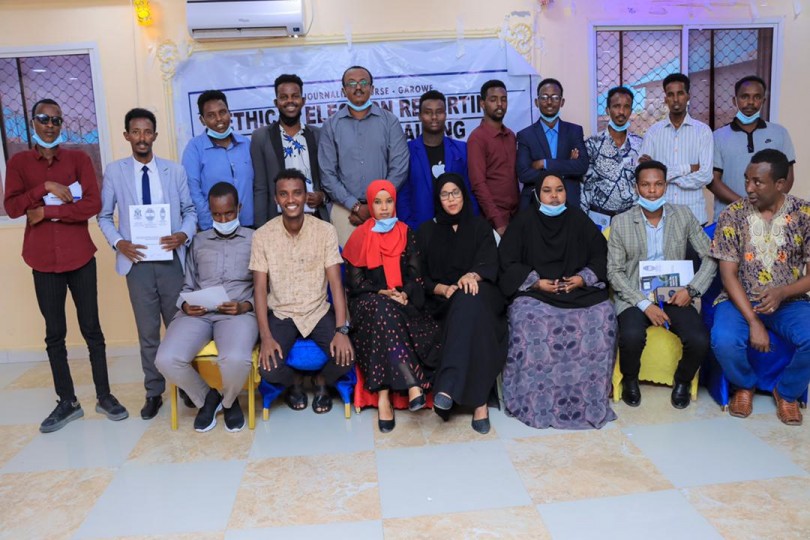 Garowe, October 07, 2021: The Media Association of Puntland in collaboration with its partner the International Media Support (IMS) concluded on October 02, the last 5-day training on ethical election reporting and safety journalism course for 20-journalists at the SAME hotel in Garowe under the EU and SIDA supported “Opening Civic and Democratic Space: Civil Society and Media Together” project.

Path to democracy…
Puntland heads to its first one-person-one vote for district councils elections on October 25, with early elections to be held in the towns of Ufeyn, Qardho and Eyl. The elections are delimited to these three districts only as a pilot exercise to test the feasibility of the electoral model in advance of state-wide local government elections anticipated to take place in early 2022.

This training is part of a rounded election reporting, safety and protection programme for local journalists in which MAP and its partner IMS have been in the recent weeks implementing in the towns of Garowe, Qardho and Bosaso with 60-journalists altogether benefiting from the training(s). This course was tailored to prepare journalists to ethically, professionally and safely cover the upcoming municipality elections and the ongoing political campaigns.

The inaugural session of the Garowe workshop was attended by chair of the host organization MAP, Mohamed Dahir the TPEC’s chair, Guled Salah who spoke at length on the importance of the Media towards the ongoing local democratization process, while also praising so far the performance of the mainstream media. The chief guest of honor for the opening was the Director General of the Puntland Ministry of Information, Eng. Mohamed Isse, who also backed the calls of vital role of the media at the moment where Puntland aims to make history by holding it’s first 1-person-1vote elections.

The MAP chair in his opening speech welcomed the participants and the guests on their acceptance to the invitation. He gave an overview on the MAP’s efforts towards preparing the Puntland journalists in covering the upcoming local elections and the expectation MAP seeks to see from the media coverage.

Dahir informed the audience that MAP signed with TPEC last MAY the journalists code of conduct for the upcoming elections, and that code seeks media/journalists to professionally execute their duties in informing the public but also forbids state and non-state actor from interfering with the work of the news-media.

MAP’s chair also sent a message to the aspiring political parties in which he said;
All political parties, candidates and their supporters, must promote conditions conducive to free, fair media practice – I want to take this opportunity to remind all stakeholders involved in the election process that there is an existing Puntland media code conduct agreed to by MAP and TPEC last MAY and created for the upcoming elections – I urge all of you to adhere to the provisions in this code, said Mohamed Dahir.

During the training, participants listened absorbed the knowledge through lectures, group works, plenary sessions and key note speeches from TPEC officials. Topics such as safety precautions when covering elections; a closer on the new Puntland municipality electoral model; planning for the election coverage, ethics in journalism, Puntland journalists code of conduct, risk assessment and medical first aid training for media practitioners were among the core areas in which facilitors educated the trainees.

At the closing of the training MAP chair, Mohamed Dahir, thanked participants for thier engagement during the period of the training, as well as, their commitment in producing news-contents that are professionally created and are of public interest giving citizens an in-depth analysis on the activities related to the local elections.

”MAP is extremely contented to have ensured that the Puntland media is fully prepared to cover the upcoming local government elections, we have trained 60-journalists based in Nugal, Karkaar and Bari regions on ethical election coverage and personal safety, we will now keep our focus to watch how the media performs their duties” Said MAP chair, Mohamed Dahir, speaking at the closing of the final training in Garowe – October 02, 2021.

Following the publishing of the list of candidates running for the upcoming municipality office(s), the gap between male and female candidates continues to confirm gender-disparity in Somalia’s political participation.

In a bid to ensure that contestants of both genders are given equal coverage and opportunity – MAP chair, Mohamed Dahir has appointed the fierce women’s rights activist the association’s secretary general Naima Muse to lead a recently established internal taskforce titled ”all-genders-equal-coverage” (AGEC) comprising of MAP board members and the association’s regional representatives.

AGEC is solely created for the purpose to ensure that women’s candidate’s political story and agenda are heard through the media just like their male counter-parts. AGEC will be welcoming to receive media-complaints from women candidates and advocate on their behalf with-no-further delay.

”Thank you for your participation, now that we are all set to take on the tasks ahead, a special reminder from MAP is that we need to see both genders are given equal coverage, we encourage you to give efforts on the underreported women stories, especially at this election campaign period, thank you and good-luck”, said Sec. general Naima Muse Elmi speaking at the closing of the Garowe training, October 02, 2021.