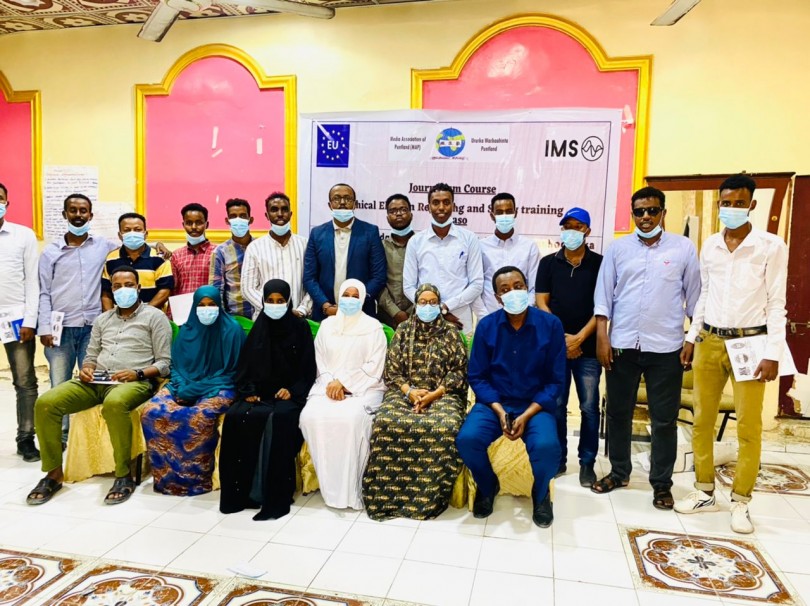 The training organized by MAP in partnership with the International Media Support (IMS) under the support of the European Union and SIDA, brings together journalists to be more equipped on ethical reporting and personal safety in the context of elections in the Puntland.

The training which is part of a holistic election reporting, safety and protection programme for local journalists that MAP and its partner IMS have engaged since 2017, specifically enables journalists in Puntland to be better prepared to mitigate security challenges faced in context such as elections as well as risks that could be posed when professional rules are not adhered to.

Mohamed Dahir Warsame, MAP chair, who welcomed the participants at the opening session of the workshop held Bosaso’s Jubba hotel, gave an overview on the objectives of the training including MAP’s plan to train 60 journalists based in Bosaso, Qardho and Garowe in preparation of the upcoming municipality elections.

“As Puntland sets to hold its first ever democratic elections on the basis of one person one vote, MAP recognizes that it is important to build the capacity of journalists for them to effectively inform and educate the public, adding, We want to have a professionally capable practitioners that adhere to ethical reporting rules and inform the public with accuracy’’ said Mohamed Dahir.

During the 5-day training, MAP hired 2-facilitators who gave both lecturing and practical modules ranging from topics such as Safety precautions when covering elections, role and responsibilities of the journalist, understanding the Puntland municipality electoral model and Planning the election coverage, situational awareness and medical first aid training – among others.

Part of the training was for the participants to understand and contra-sign the MAP-TPEC agreed code of conduct for journalists when covering the upcoming local election and at the end each trainee received a copy of the document.

The trainees found the training course immensely rewarding and that it allowed them to gain specific skills that will contribute to their personal safety and an in-depth understanding on the context in which the upcoming local government elections will be held.

MAP team coordinating the implementation of this state-wide journalism course will now be traveling to Qardho district to carry-out a similar training for journalists based in the town.

Puntland heads to its first one-person-one vote for district councils elections on October 25, with early elections to be held in the towns of Ufeyn, Qardho and Eyl. The elections are delimited to these three districts only as a pilot exercise to test the feasibility of the electoral model in advance of state-wide local government elections anticipated to take place in early 2022.