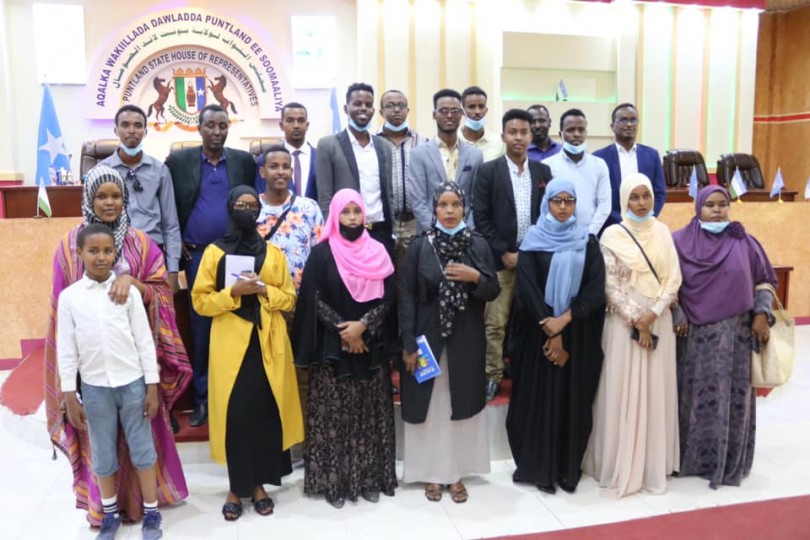 Garowe, June 15, 2021: The Media Association of Puntland (MAP), with support from the National Endowment for Democracy (NED), and in collaboration with the Puntland parliament has successfully concluded a journalism course on parliament reporting.

The three-day training, attended by 15 local journalists, kicked off on the June 13 and was held at the SAME hotel in Garowe. The training was aimed at sharpening the skills of local journalists on the beat of legislative reporting.

The opening ceremony of the training was attended by the invited guests namely Chairman of the Social & Cultural Affairs Committee of the Puntland House of Representatives. Abdiaziz Ahmed Dhahar, Deputy Chairman of the Committee, Abdirashid Mohamud Yusuf (Afgadud), Secretary General of the House of Representatives, Mr. Abdirizak Hiddig Warsame and the Director of communications, Mr. Abdiweli Gooni and Dr. Abdifatah Nur Ashkir, Puntland State Minister of information.

Mohamed Dahir Warsame, MAP chair, who welcomed the participants and guests at the opening, spoke on the objectives of the training. He underlined the importance of these second time parliament reporting that MAP has organized for media practitioners.

Chair mentioned that the training will produce the second batch of pf trainees equipped to cover the Puntland Parliament. He underlined that it is part of the guild’s mission, as well as the MAP’s long-term strategy to prepare local journalists to specialize on producing news on specific topics more sort of beat reporters.

“The intrinsic worth of this noble career can be better valued by providing a tailored training course targeting local journalists reporting from the state Assembly. This training is the second of its type to be held in Garowe for local journalists, the first one was held on late February 2020 and results on parliament coverage has so far improved and immensely successful.

”It is our understanding that an effective Media Coverage of the Puntland legislative branch will deepen public trust and public access to the complete parliament structure and its undertakings,” Said MAP chair, Mohamed Dahir Warsame.

Guest speakers who gave speeches at the opening ceremony of this training all noted the importance of having a capacity-strong media engaged at informing the public as well as the need of accuracy and ethics practice for journalists covering the activities of the Puntland’s House of Representatives.

‘’Freedom of expression has a limit and controllable by law, journalists should be accurate and ethical in their reporting, we are open to criticism provided the news report is truthful, of-course journalists who wrongfully misinform the public will be held accountable as stated in the media law. Through this training we will teach you the different functions of the House of Representatives, including their roles and responsibilities’’ Said Abdirizak Hiddig, Secretary general of the House of Representatives

Mr. Abdiweli Gooni in his speech said, Am happy to see a training of this type for the second type, it shows how MAP is committed towards the development of the country by educating the media workforce on how to better cover the activities of the State’s House of Representatives. We welcome the initiative and looking forward to further cooperate with the mainstream media in the soon future, Said Mr. Gooni, Parliament’s Communications director.

Mr. Abdifatah Nur Ashkir, Puntland’s State Minister of information who officially opened the training commended MAP for putting efforts on organizing the training. He accentuated the importance of the media and why the journalist should equip him/herself with necessary skills and tools prior to covering events.

The first two-days of the workshop covered topics surrounding a detailed review of parliamentary structures and procedures to ensure journalists can report on legislative developments with accuracy and objectivity.

Among others, participants were educated on the ways in which the political class seeks to influence, and sometimes manipulate media coverage and how to circumvent these efforts.

On the second day of the training, participants received a thorough lecture from, Parliaments Secretary general, Mr. Abdirizak Hidig educated participants on the structures of the House of Representatives, the duties and responsibilities of the 10 committees, and how they are interrelated.

The third day was a vital moment for the participants, who were taken for a tour to the parliament. Participants were introduced to the various offices conference halls the parliament comprises of and most importantly trainees got familiar with the parliament staff  and some of the MPs present at the moment of the tour.

Photo Puntland Parliament: Participants listen to a tour brief inside the house of representatives; June 15, Garowe.

Khadra Ahmed – a TV reporter said the training is very important and timely, as it was difficult for her to report on parliament before, “this training has been an eye opener for me and has definetly helped me to understand the rules and proceedings of the Puntland House of Representatives and how to angle my story.”

The Media Association of Puntland (MAP), applauds the Puntland Parliament for being cooperative during the implementation of both the February 2020 held training and now, the just ended training.

The Association is committed towards strengthening the Puntland Media practitioner’s capacity – moreso on developing beat reporters specialized on specific topics/areas.