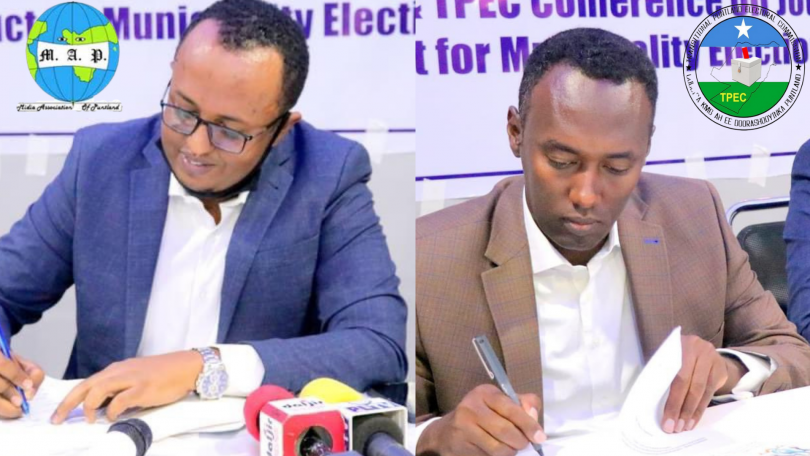 Garowe, May 15 2021: At an event organized by the Puntland Non State Actors’ Association (PUNSAA) in the evening of May 13, 2021 at the Martisoor Hotel in Garowe, MAP Chair Mohamed Dahir, and TPEC chair Guled S. Barre signed the Puntland media code of conduct ahead of local municipality elections.

”Today we are here to discuss and sign the media code of conduct for the upcoming voter registration and elections for the local municipality, adding, the code was first developed back in 2013 with support from PDRC, and this current version is an updated copy that MAP and TPEC have revised and tailored for the municipality elections..

”This 8-paged document is an imperative guide to how the Puntland journalists should conduct themselves at all times but most especially during the voter registration process and when reporting on the approaching municipality elections,

”It contains a set of rules that should inform ethical journalism and on the other side it instructs key stakeholders such as TPEC to facilitate and give access to the media without conditions, With that, I expect from local media to abide by the set of rules and perform your duties professionally,

”Finally, to TPEC the other stakeholders such as the political parties in the race and ask you to recognize , respect and support the self-regulating commitment of the media’’ said MAP chair Mohamed Dahir.

Guled Barre, Chair of TPEC, pledged to perform thier and facilitate the work of the media during the period. He promised to be transparent and take media criticism provided the story-line is accurate and got it’s facts right.

”We will do our part and looking forward to collaborate with you. We will be transparent and supportive to your work. We expect the media to perform their duties with responsibility, ethically and professionally” said Guled.

The official observers for the event gave speeches in which they described the signing of the code of conduct as a step forward and promised to the support the efforts from their side. They also echoed to the importance of the media in the ongoing democratization process.

Among them, Puntland’s Minister of Information Abdullahi Ali Hirsi (Timacade) who said in his speech ”The expected municipality elections to be held in Puntland with citizens casting their votes will be the very first of it’s kind to happen in our region. Thus will be a new experience for most of us, that is why the media is important and needs to take extra precautions when reporting the news” said the Minister.

MAP is on the process to disseminate code of conduct to media outlets operating in Puntland and to Political parties and other relevant stakeholders for their consideration.

In furtherance to that, MAP in collaboration with it’s partner International media support (IMS) funded by the EU will soon be training 60-journalists on ethical election reporting, as part of it’s mission to ensure that the media positively contribute to the democratization process with professionalism and accuracy.