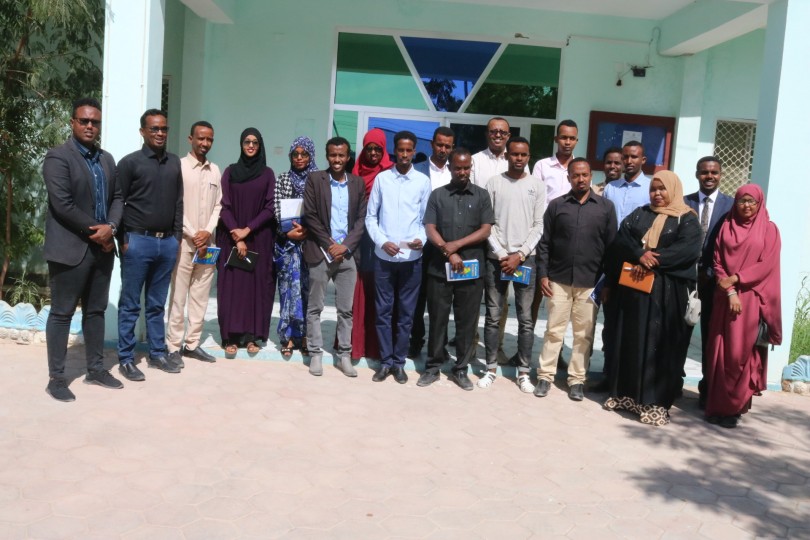 Garowe, February 27, 2020: In a bid to ensure that the Puntland and Somalia’s public are abreast on the day-to-day activities of the Puntland’s legislative branch, the Media Association of Puntland (MAP) with support from the National Endowment for Democracy (NED) organized & concluded a three-day journalism course on Parliamentary reporting.

Held at the PDRC hall in Garowe from 24th – 26th February, 2020, the workshop aimed at improving the objectivity and professionalism in Puntland’s legislative reporting. Mahad Koronto, a veteran trainer working with the Media Ink was appointed to facilitate the workshop and delivered the course to 15 Journalists participants most of them working as parliament reporters serving local media outlets based in Garowe.

Mohamed Dahir Warsame – MAP chair – gave an opening speech, he first welcomed the invited guests and the workshop participants. The chair gave an overview of the workshop and explained the objective of the training.

‘’This training is part of an ongoing multifaceted strategic plan of MAP in pursuance to it’s mission towards defending  the media and public’s right on access to information with the aim of ensuring the effective realization of freedom of expression and information in Puntland.

The 3-day course will equip the participants with the essential tools and the know-how-skills on covering the Parliament, I urge each of the participants to take advantage of this vital learning opportunity’‘, said Mohamed Dahir Warsame MAP chair at his opening remarks.

On his part, Mohamed Issa, Director General of the Puntland Ministry of Information, culture and heritage, described the training as a timely and yet a vital one, he called for the participants to take full advantage of the 3-days in which the course will be delivered.

Puntland Parliament has 10-subcommittes that administer enduring executive operations, detect concerns for legislative appraisal and recommend sequences of action to the parliament. At the opening session of the workshop, Parliament representative pledged support to the efforts in reforming the media coverage of the state’s legislative branch by allowing access to the media outlets.

Abdirizak Hidig Warsame, Puntland Parliament’s secretary general in his keynote speech underlined ‘’The fact that some of the journalists in this room have been in the media sector for more than a decade, their participation in this training will definitely build their skills on understanding the Parliament’s activities especially the various committees of the parliament and their duties’’,  He added, ‘’I applaud MAP’s efforts in organizing this workshop and from ourside we are open to the media and will cooperate in MAP’s move to improve how report is covered in the Assembly’’.

In each day-long of the workshop was divided into numerous sessions, on topics such as the relationship between legislatures and the press; objectivity and professionalism in reporting on provincial legislatures; understanding editors perspectives on legislative reporting; and Improving the already established Puntland Parliament gallery, among others.

The workshop provided journalists participants with an opportunity to physically tour the Parliament house, being the very first official visit in which Puntland Media outlets were introduced to the Puntland’s house of the people. During this visit, accompanying the tour was the Parliament’s secretary Abdirizak Hiddig, the Parliament’s communication director Abdiweli Gooni and MAP’s secretariat lead by the Association’s chair Mohamed Dahir Warsame.

Tour Photo: Participants get a briefing on the ”Assembly’s work” from the Puntland Parliament’s Secretary General.

‘’I’m pleased to have officially taken the MAP team and their members Parliament reporters and introduced them the various sections comprised of the Parliament house, importantly, this is the very first visit of it’s kind. Adding, the Parliament is open to improve the access of media to the Parliament and we hope to achieve the goal that aims to inform the public on the parliament activities’’ Said Abdiweli Gooni, Parliament’s communications director.

‘’No doubt, the Parliament have shown the willingness to give access to media and open to scrutiny for the advantage of the Public – this was evident to us  through recent activities i.e. a roundtable on media access to parliament held on November 2019 and through this just concluded training’’

We want the other government branches to follow the same route as the parliament and collaborate with MAP in establishing the State’s access to information’s act, we are hopeful the will cooperate’’ Said the MAP chair, after the finishing the parliament visit.

The Media Association of Puntland (MAP) is impressed to see the Parliament’s officials’ cooperation and pledge to cooperate in improving the Public’s right to government information in this case parliament information. However, the article 3 of the Puntland’s Media Law 2016 provides the establishment the Puntland access to information act, MAP in this 2020 year aims at cooperating with the relevant stakeholders in establishing a very vital act that will heavily benefit the Public.