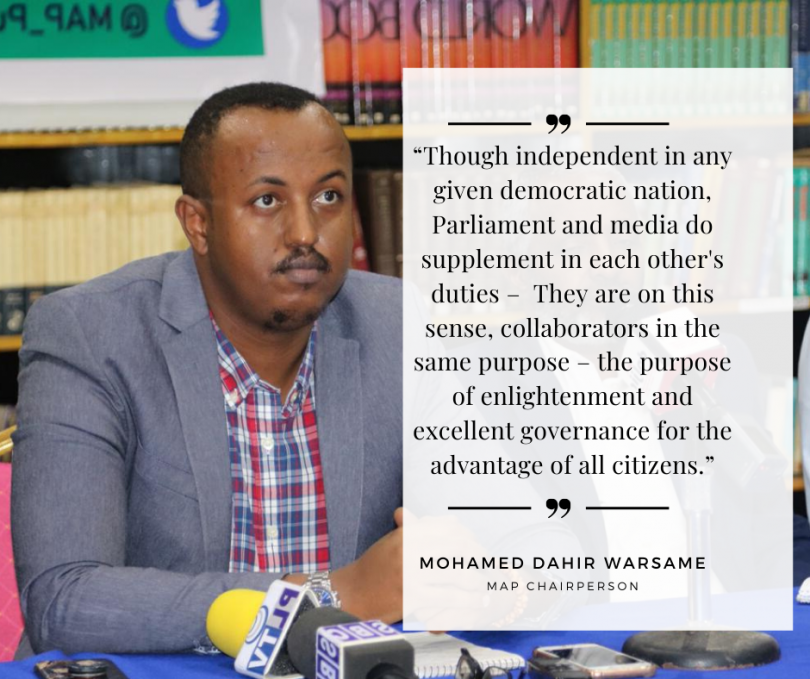 Garowe, December 14, 2019:The mass media plays a central role in the flow of information from parliaments to citizens. However, due to the lack or narrow access to Parliamentary information and the low-skills of local journalists in informing the public on the parliament activities – media’s role hasn’t been significant in the front of legislative reporting.

In a move to ensure Public’s right to Parliament information, 15 participants drawn from the Puntland State Members of Parliament, MPs Secretary General, office of the Parliament’s director of media and public awareness unit, Puntland Ministry of information, Garowe based media executives and MAP secretariat participated in a two-day roundtable discussion on media access to Parliamentary information.

Held from 11-12 November 2019 at the PDRC conference hall, the event was organized by the Media Association of Puntland (MAP), under the auspices of the National Endowment for Democracy (NED) Project Grant – 0639.

The purpose of the roundtable was to improve the professional working relations with the aim to increase citizen awareness and engagement of Parliament and its parliamentary processes by engaging lawmakers to discuss new-working models.

Mohamed Dahir Warsame, MAP chair at his opening remarks welcomed the participants, explained the objectives and importance of the event.

On the conference objective, the chair noted that the two-day conference aimed at discussing issues surrounding the lack of access to Parliament information and how best to tackle challenges.

On the importance of the Roundtable, the chair underlined that an informed society governed by transparent and accountable democratic institutions are vital for society development towards prosperity.

Dahir acknowledged the need of capacity enhancement on the side of journalists when it comes to covering the parliament and mentioned that MAP has put a plan in place to improve the skills of the media practitioners.

During the roundtable’s debates session which went off track or heated in several moments, especially when Journalists accused the other side for blocking media access,  nevertheless, the lawmakers were in agreement that the media’s role in informing the public is constitutional and that they are open to improving the working relationship with the Fourth-Estate.

”The media also known as the fourth estate, if not utilized in a positive way could lead to a collapse, if used positively it can be a major backbone to society development. Access to information It is a journalistic right and I welcome the objectives of this conference” Said Eng. Mohamed Issa Osman, Director General of the Puntland’s Ministry of Information.

Director of the newly formed Parliament Director of media and public awareness, Abdiweli Gooni, weighed in with a pledge to strengthen the journey on media access to parliament information.

”Government, Parliament and the media are different parts but on the same boat all heading to one direction, within my capacity I will ensure that the media have access to Parliament information” said Parliament’s director of media and Public awareness dep’t.

”This program on media access to parliament information is very important, the current Parliament-media relations is good, however to make it work better is noteworthy, am looking forward to work towards the improving initiative” said Abdirizak Xidig Warsame, Parliament’s Secretary General.

At the last day of the roundtable, MAP and representatives from the Puntland parliament formally agreed on set of points, stated below;

To ensure the roundtable objectives are fully achieved, a joint working team from MAP and the Parliament are drafting a memorandum of understanding to back the roundtable’s deliberations.

“The consensus reached today between the media and the MPs representing the Puntland’s lawmaker is extremely important and signals the willingness of the current parliament in promoting transparency by accepting the media to have access to Parliament information, launching of the media gallery today is not a standalone solitary development but part of MAP’s broader initiative to increase citizen awareness and engagement of Parliament, other plans aimed at demanding access to government information are underway such as the lobby to develop the Puntland access to information act” MAP chair noted.