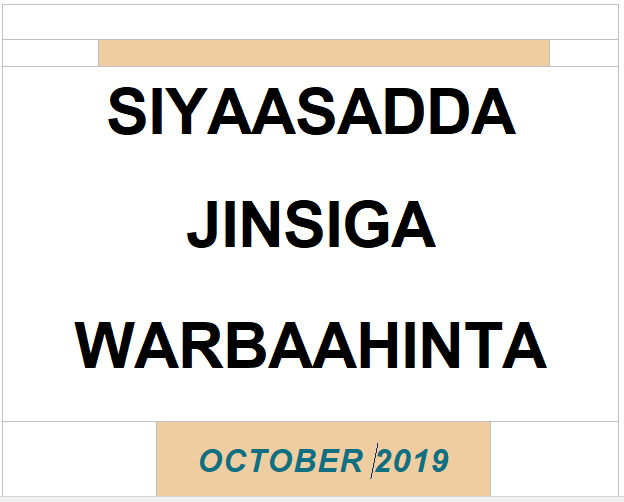 Garowe, October 21: The Media Association of Puntland (MAP), is pleased to announce the launching of the Free Press Unlimited (FPU) supported Puntland Media Gender policy (PMGP).   The PMGP policy is the first of its kind in the history of the Somali media fraternity.

The PMGP aims to ensure that the Puntland media workforce of both genders are provided with equal opportunities, As a result, the policy hopes to provide an enabling environment for gender sensitivity  in and through the Puntland Media.

At the inaugural session of the PMGP conference, MAP chair Mohamed Dahir Warsame welcomed the participants and gave a brief on the objectives of PMGP.

”Today is a very important day for MAP, after years of research and advocacy on seeking an enabling environment for Puntland women in the media we are finally introducing a gender policy that will narrow the gender gap in our media. The chair added, we call on our media owners and executives to approve and effectively apply in their respective newsrooms” Said the MAP chair

While talking on the conference activities, the chair said ” Before presenting the PMGP, we will present the Puntland Media Monitoring results and later have discussions on the contents of the PGMP”

The opening remarks of the MAP chair was followed by a keynote speech given by the Honorable Sahra Abdi hersi, in her speech she noted ”We are here today to ensure this gender policy is approved and effective, we want to see that both female and male journalists are have an equal consideration on opportunities including salaries” Said Puntland’s Deputy Minister of Women development and family affairs.

The Puntland  Minister of Information, Communication, Culture and Heritage the invited chief guest of honor supported the initiative aimed at empowering the women in the media. He also pledged in his capacity to contribute in the promotion of safety and protection of the local journalists.

”After the fall of Somalia we all know how vital women have been to the society and given them an equal share shouldn’t be a problem. Adding, on the other side I want to take this opportunity to assure Puntland Journalists that in my capacity no journalist will get into trouble as a result of his/her work”

Following the inaugural session of the conference, MAP’s project manager presented the Puntland media monitoring result for the year 2018. Participants were taken through the various section of the results that examined the news quality, ethics in the news content and the gender coverage of the Puntland news outlets.

The PMGP was presented by facilitator Burhan Ahmed Dahir, who also gave the participants and equal time to give comments and share their views. At the final stage of the presentations, the unanimously
approved  final version of the PMGP was signed by 9-media houses.

It was agreed that after 6-months the policy will be reviewed and a follow-up will be done from time to time by the MAP gender consultant while working closely with the media executives and the MAP secretariat.

An action plan was put in place to be implemented in the upcoming 6-months period;

MAP is hopeful that media managers will fulfil the pledge to promote gender equality at their respective work-place. The Association will tirelessly follow-up the implementation of the PMGP closely through it’s gender consultation and make the Puntland media sector an enabling environment for both genders of the workforce in the sector.