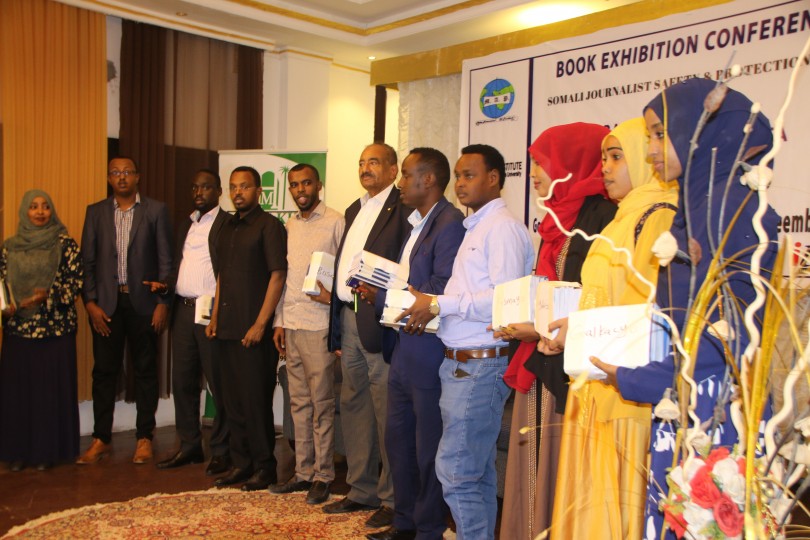 Mogadishu, November 16, 2018: – In a ceremony organized by the Media Association of Puntland (MAP) held at the Mogadishu’s Maka Al mukaramah Hotel on November 14, 2018, under the auspices of the international Media Support (IMS) and Fojo institute, the Somali media and the public saw the launch of the ”Somali Journalist safety and protection manual”.

Broadly attended by the Somali government officials and members of the federal parliament, executives drawn from media houses & Journalists umbrellas, individual journalists invited from across the Somali regions as well as leaders drawn from relevant civil Society organisations, the launch event marked a major milestone on the safety and protection of Somali journalist in Somalia: the 30page manual will help media practitioners better get prepared when reporting from volatile settings and gives micro-advice and techniques to major work and non work related for Journalists.

The manual is a culmination of a process which included extensive consultations by the Media Association of Puntland (MAP) in collaboration with the major active media umbrellas namely SIMHA, SWJ, SOMA, with support from the IMS and FOJO institute, with reviews and contribution made by veteran journalists and local security experts, including a large number of individual local Somali journalists.

At his opening remarks the MAP chair – Mohamed Dahir – thanked all those who contributed to the completion of the book which he said would be a useful resource of safety for Journalists to refer. He called on media practitioners to use the manual as a reference when performing their duties and not to ignore the potential it carries.

”Somali Journalists finally have a safety guidance written in their own language, tailored to their local context, and adapted in a context that is familiar to them,” said MAP chair Mohamed Dahir Warsame. “I however want to urge them to make use of the manual for them to have the benefit of the manual, I’m confident that the guide will definitely be a vital resource that will prevent harm when performing their duties in fierce environments as well as their personal safety during and after work”!

Abukar Al badri, the IMS Somalia program coordinator, who gave a brief on behalf the IMS/FOJO support provided to Somali Journalists Safety manual, summoned their continued support  promoting the safety and protection of Somali journalists while he noted that IMS/FOJO have in the recent past supported media organisation to provide Safety trainings, installation media house safety protocols, developing the Somali Journalist safety and protection manual.

The launch-conference saw praises through the keynote speeches, it also fascinated the attention of civil society groups and even members of parliament especially on the brevity and contextual tailoring in which the manual has been prepared.

General Director of the Somalia’s Ministry of Information, Posts and Telecommunication, Abdirahman Yusuf (Al Cadaala), at his keynote address applauded the collective efforts made in developing the manual piloted by the Media Association of Puntland (MAP), he also welcomed the continued media support provided by the International Media Support (IMS) and Fojo institute towards the Somali media.

Diini Mohamed Diini, chair of the Somalia south central non state actors (SOSCENSA), congratulated once again MAP’s head Mohamed Dahir, at his success during the December 2017 MAP board election. Diini was among the observers of the election, he called the election process among the few transparent election he participated.  While talking on the importance of the manual, he applauded the joint efforts led by MAP of producing the guide and on the other side he urged media organisations to utilize the contents of the manual for trainings as it carries crucial information that could be useful when educating end users on topics related to their safety.

While the Somali authorities have the prime responsibility in putting in place efficient measures to protect journalists and journalism practice against attacks aimed at silencing those exercising their right to freedom of expression, Somali Federal and State authorities remain without clear procedures and a plan of action in handling crimes committed against Journalists, in addition to that the ambiguous Somalia Media Law is yet to be brought to conventional standards, the bill carries provisions that directly oppress the freedom of expression.

The MAP Chair through his speech at the conference has demanded the Somali Federal and regional state authorities to take their responsibility serious and act now. Importantly the chair has asked authorities to take immediate actions on launching thorough and fair investigation directly towards bringing the culprits who have in the past committed horrific crimes such as murder against innocent Journalists, and; He also pointed out the need to get back to the drawing table on the review of the Somali Media Law.

A respond to the MAP chair’s call on the review of Somalia media law, came from the keynote address of the Chairman of the Somalia parliament’s Committee for information & media, public awareness, culture, post & Telecommunication, ”I warmly welcome the Somali Journalist safety and protection manual and i believe some of the chapters in this manual could be adapted to the ongoing review of the Somali Media law, adding we are soon going to hold consultative meeting with stakeholders and would like to invite MAP to take part on the review” Said Hon. Khalid Maow Abdulkadir.

The re-opening of the Somali Media law review is extremely important and MAP sees this call as an important and urges media stakeholders to put all efforts in advocating the articles that have raised concerns through this window of opportunity to review the media bill as mentioned the parliament committee chair responsible for the review of this disputed media law.

The manual comes at a time where international watch dogs such as the committee to protect journalists (CPJ) has ranked Somalia number one, among the most dangerous countries where culprits of Journalists murder are not brought to justice, this was reported in CPJ’s 2018 impunity index report.

The conference came to an end with the distribution of 500copies safety manual, individual journalists representatives invited from Bosaso, Galkaio, Beletweyne, Baydabo, Kismayu and executives of the organisations SIMHA, SOMA and SWJ received packages of the manual who will later distribute to media practitioners in their respective locations.