Home » #Puntland: MAP celebrates the release of its member Journalist Kilwe, calls for a speedy investigation into murder of journalists’ cases 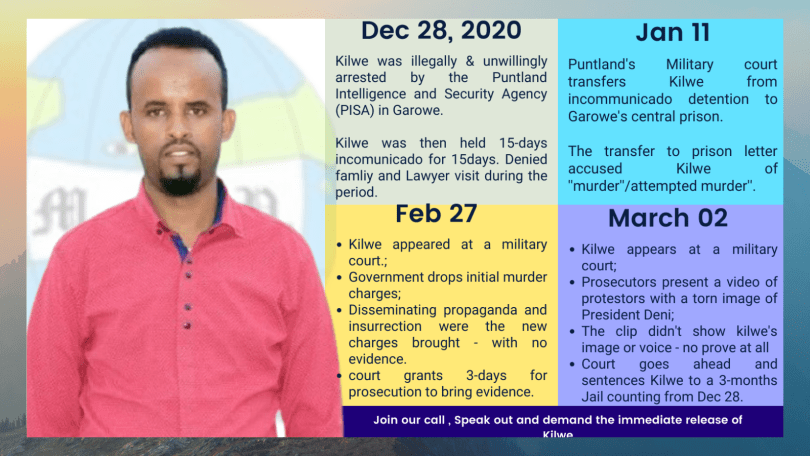 Garowe, March 23 – The Media Association of Puntland is pleased to have their colleague – Kilwe Adan Farah released from Garowe’s central prison following a presidential ”pardon issued” by the Puntland President Saed Abdullahi Deni in the afternoon of March 22, 2021. MAP team led by it’s chair, Mohamed Dahir, were present at the central prison during the release.

84-days in behind bars, 2-uninformed court rulings and freed on a presidential ”pardon”; Kilwe was arbitrary arrested by the Puntland intelligence and Security agency (PISA) on Dec 28, 2020, held incommunicado by the same agency for 15-days; transferred to Garowe central prison on the Jan 11, 2021; first sentenced to 3-months on March 03 by a military court on charges of conspiracy and disseminating propaganda with no single evidence brought; the verdict was appealed by the military prosecutors with no legal grounds on their appeal; and on March 17, the Puntland Military supreme court handed down Kilwe a 3-year jail term at a trial that was done in the absence of the defendant’s lawyer, Family or even MAP.

According to Wikipedia, a pardon is a government decision to allow a person to be relieved of some or all of the legal consequences resulting from a criminal conviction – arguably the use of the word “pardon” in this perspective may be disingenuous. Important to note that Puntland military courts and their prosecutors who have no jurisdiction over a civilian failed to prove their case on several occasions in which Kilwe appeared in front of court.

‘’call it a pardon or not, the good news today is that we celebrate the freedom of our colleague who was unlawfully held for almost 3-months, he didn’t deserve to withheld his freedom an hour and yes it was a painful experience not only to him, but has also sent a chilling effect to the nation’s entire media fraternity, MAP seeks a public apology from those who violated and kept Kilwe in custody for 84-days’’ Said, chair Mohamed Dahir who spoke on phone to the MAP communications dep’t after escorting our colleague Kilwe Adan out of central prison in the afternoon of March 22, 2021.

The Media Association of Puntland condemns the use of the military court and the Somali penal code to punish journalists. MAP calls on the Puntland government to respect the media’s independence and freedom of expression, urges the authorities to promote the safety and protection of local journalists.

In the aftermath of Kilwe’s prolonged detention and all the compartments of his case, MAP sees the urgency in fully activating the Puntland Media Council (PMC) that is established but not effective to administrative issues surrounding funds. PMC will be a major deterrent to gov’t’s misuse of power such as weaponizing the justice system to clampdown the media, as well, it will also hold journalists accountable for their professional wrongdoing.

‘’the notion that, those in power can without a legal cause arrest a journalist, deny his/her rights of per-trial detention and later free him/her just because a government official is not happy with critical reports is extremely dangerous, intimidating and contradicts the constitutional rights of freedom expression and media independence in Puntland authorities must allow journalists to do their work without fear of reprisal from state and non-state actors. He added, I think the need to have fully operational Puntland media council is very urgent, we will do the final touches and mobilize the needed resources to get this body on board’’ said chair Dahir.

The release of Kilwe couldn’t have come without the existence of a concerted effort involving local and international partners who joined MAP to demand an immediate release and a halt of the gov’t’s media clampdown. MAP is grateful to all those who joined the coalition, especially Free Press Unlimited for supporting the legal representation, Committee to protect journalists and Amnesty international for amplifying MAP cause to free Kilwe through solid press statements, local partners such as PUNSAA, and finally to all the Adhoc advocacy campaigns done by the diplomats and goodwill ambassadors through the diplomatic channels.

Feedback on investigation into murder Journalist

Puntland authorities are yet to give official statement on the whereabouts of launched investigations to the murder of the late journalist Jamal Farah Adan who was murdered by unknown assailants in the evening of March 01, 2021, not far from his residence in the northern side of Galkaio city.

‘’We will be re-activate our advocacy meetings aimed at pushing for thorough and fast investigations into the murder of Journalist Jamal Farah Adan, our hope is the Mudug regional and Puntland security agencies will activate their operations bringing the culprits to face justice and get punished for taking away the life our member – , said Dahir

National Discussion misses the opportunity to address issues of journalist safety and protection of Journalist; The currently ongoing national discussions between the Federal government of Somalia (FGS), Federal member states (FMS) and presidential candidates doesn’t have any solid part that directly addresses the importance of defending the rights of the media, safety and protection of Somali journalists. In addition to the lack of a national political will to a free and independent media – Somali federal media law remains ambiguous, Journalists continue to be victims of attacks from Government officials, business tycoon and from terrorist groups. MAP calls for an all inclusive discussion that establishes a national Journalist safety mechanism.

‘’while we can understand the importance on the ongoing political dialogue and the threats of existing political deadlock which are central to holding the next national elections, however, ignoring the inclusion of topics that aim to tackle the safety and protection of local journalist especially at this moments were media is needed to cover the elections is just a concern and another evidence that Somali politicians do not accommodate the need of a free press and the public’s right to information – Said Mohamed Dahir, MAP chair.