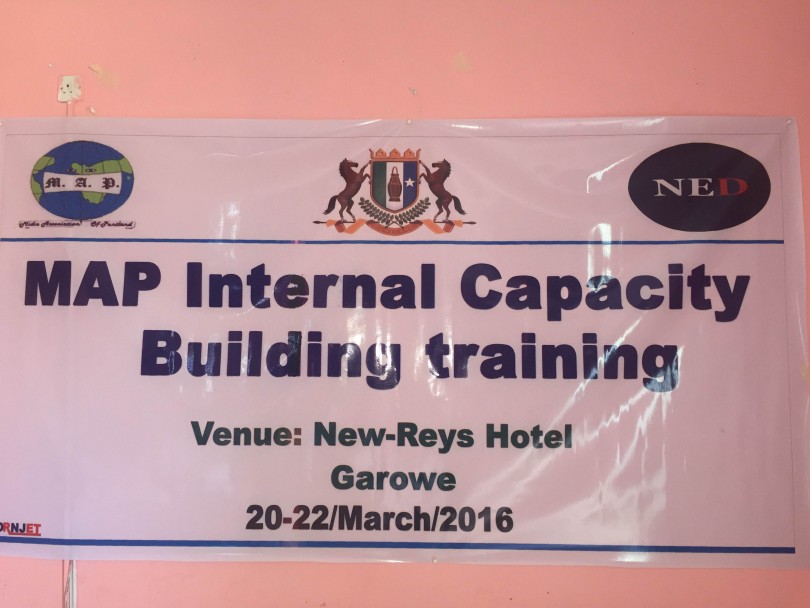 Garowe, Puntland Somalia March 24, 2016: A three-day internal capacity building training was held for MAP’s staff, board and representatives from selected media outlets from  20th – 22nd March 2016, held at the New Rays hotel in Garowe. 20 participants, including 3 female, took part in the training, conducted by the Media Association of Puntland supported by the National Endowment for Democracy.

The Media Association of Puntland – MAP’s Secretary General in her opening annotations welcomed the participants and explained the rationale of the workshop, She Said ‘’I wish to thank you all for coming to attend this crucial workshop that is tailored to  empower our skills in budgeting, strategic planning, managing human resources and conducting evaluations, she added, it is important to note that this activity is sponsored by the National Endowment of Democracy – NED meant to ‘’promote media sustainability in Puntland’’ thanks to their generous support’’ –  I call for your active participation and once again welcome! , Noted Fatuma Mohamed Mohamud – Secretary General.

The trainers uttered that the course was tailored to suit institutional professional development, while the cooperation among the training participants has ensured a balance of skills and experiences being shared.

The Participants recommended that MAP should adjust its policies with focus to empower the organizational growth, MAP membership card should be delivered on a wider scale, MAP should engage with donors and on the same wave length partners to support activities of the Association, MAP should continue engaging with the Puntland authorities for a better media law.

The Association’s Chair took full note of the workshop’s outcome and pledged to take into consideration on the recommendations from both the trainees and the trainers.

‘’ I would like to thank the trainers, participants for this 3-day long activity, similarly I want to thank MAP’s project personnel for their tireless efforts and knowledge throughout the period on implementing the various project activities that started on 1st MAY 2015 customized to promote media sustainability in Puntland’’, Adding ‘’I pledge to fully take into consideration of your noteworthy comments and recommendations and will put into practice, thank you all and well done, Said Faisal Barre MAP’s chairperson.

The training also saw the participation of the entire 9-person MAP board members.

This project, funded by the  National Endowment for Democracy (NED), sought  to enhance the sustainability of media outlets through improved organizational management and staff skills, to promote media legislation that supports freedom of expression and independent media.

The project commenced in MAY 2015 and is scheduled to run till APRIL 2016 . The generous support from the National Endowment for Democracy helped MAP to carry out the following in 2015/16; to conduct media training, media stakeholder meetings, advocacy workshops and a non-fiction writing workshop as part of its effort to improve the capacity of the sector and promote freedom of expression in Puntland.

As we head towards the execution of this project pending activity will be a one-day writing workshop for 10 representatives from media outlets to develop their skill in writing about good governance and the process of democratization currently underway in Puntland. This will be designed on creative non-fiction and how this helps to tell a story in order to engage people in new concepts and ideas.

Participants trained by the NED supported project launched the Puntland Media Law review lobby and were key drivers in  successful  advocacy campaigns for press freedom in 2015. The lobbying targeted the office of the Puntland president and the Puntland parliament.

2016 promises to offer enhanced opportunities for MAP to deepen our efforts to bring a better environment for journalists in Somalia through increased negotiations with the Puntland government on reviewing the media law, and improving government resolve to end violence and impunity against Somali journalists – with valued educational improvements for journalists, strategic partnerships to expand journalists access to information, relentless advocacy for press freedom, a significant push for policy review as well as courage, tenacity, and a spirit of solidarity in a dangerous environment of work.