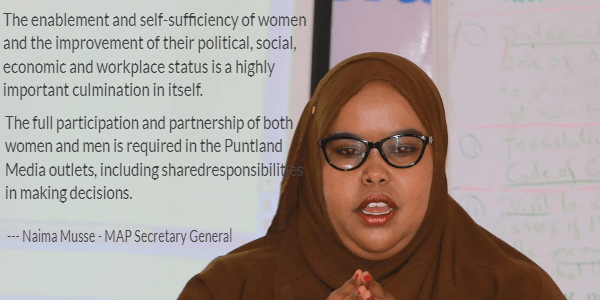 Garowe 09 July, 2019: The enablement and self-sufficiency of women and the improvement of their political, social, economic and workplace status is a highly important culmination in itself. The full participation and partnership of both women and men is required in the Puntland Media outlets, including shared responsibilities in making decisions. Securing change requires policy actions that will improve women’s access to leadership and fair workplace policies that give both men and women equal opportunities on wages career development in and at the Puntland newsrooms.

Our targets and efforts towards Empowering Puntland Women in the Media 2019/2020
In the past (2) years MAP has encouraged the development of educational and training programmes for women in the media with the purpose to empower and to increase female journalist workforce in the Puntland media fraternity, including the push of access for women practitioners at the newsrooms’ leadership positions across the Puntland media outlets.

Major and recent activities implemented by MAP with the support of international partners namely the National Endowment for Democracy (NED) and the Forum Syd Somalia and the Free Press Unlimited (FPU) have been so effective and timely towards MAP’s mission in developing the female in Media workforce and reviving the dying female journalists’ networks in Puntland.

The Media Association of Puntland (MAP) is an independent, nonprofit organization registered in Puntland recognized as the legitimate representative body for Puntland Journalists & media establishments that promotes press freedom in Puntland state Somalia. MAP promotes press freedom in Puntland regions and defends the right of journalists to report the news without fear of act of vengeance. MAP also engages dialogue with the Puntland authority on legal framework by protecting freedom of expression and media freedoms through policy and legal reforms.