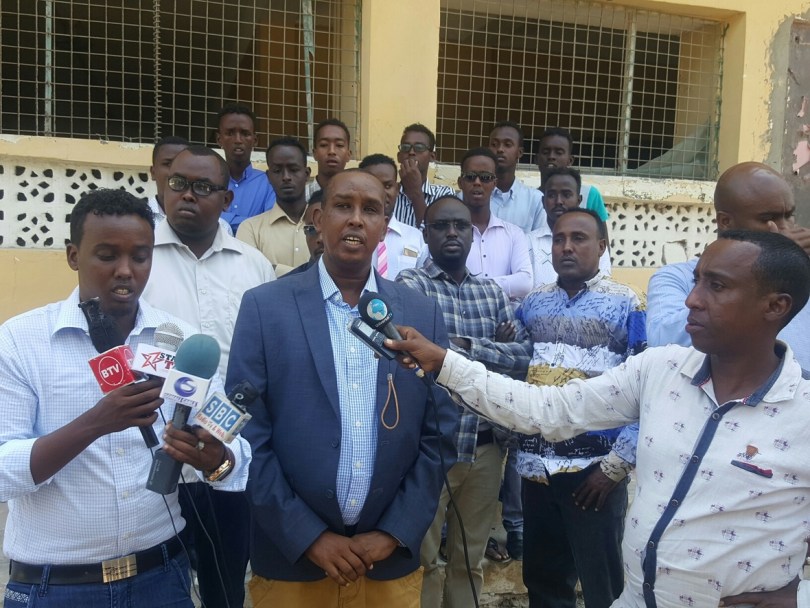 The National Union of Somali Journalists (NUSOJ) joins its affiliate the Media Association of Puntland (MAP) in condemning the administrations action aimed to undermine the media freedom the regions under its control, after suspending from operation the London based Somali Television (Universal TV).

On Monday morning 6 March, 2017 journalists led by NUSOJ gathered and held a press conference in Mogadishu to show their concern over the suspension order against Universal TV.

The Universal TV was imposed upon an indefinite activity suspension on Sunday 5, 2017 by a directorate from the Puntland’s ministry of Information, accusing them to have violated the Puntland’s security.

A Press statement released by Media Association of Puntland (MAP) after the suspension order from the Puntland Information Ministry against Universal TV strongly condemned the unprecedented decision of the Puntland Ministry of Information to take Universal TV off the air with claims that the UK based TV’s programs created security concerns and unprofessional conduct,

“We join our affiliate MAP in condemning the act of suspending the Universal TV without proper evidence to what has been accused of which is a direct violation against the already ravaged freedom of the press,” Mohamed Ibrahim Moalimuu, the Secretary General of the National Union of Somali Journalists (NUSOJ) said, “We demand from the Puntland authorities to immediately lift the ban and allow journalists to freely exercise the given freedom.”

The National Union of Somali Journalists (NUSOJ) protests the ongoing unjustified closure of Universal stations in Puntland, Somalia and we call on the Puntland authority to allow Universal TV stations resume their operations and guarantee freedom of expression unconditionally”

Attacks against the journalists and the media stations have been on the rise in recent years in Puntland. In June 2016 Puntland Ministry of information closed down all station of Universal TV in Puntland despite it was later in July allowed to resume its activities after receiving what was called a presidential pardon.