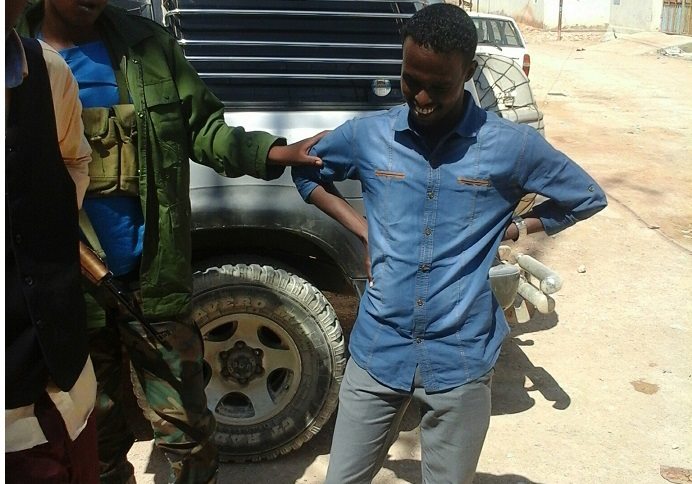 Du’alle, who works for Puntland-based independent station, Radio Garowe and Puntlandpost news site, was threatened by Col. Samatar while broadcasting daily news on the station’s FM in the capital, Garowe.

“I was at work when police commander along with security forces arrived at the station building, he informed me that police oppose publishing of a report on mini-van drivers’ protest on Puntlandpost,” said Ali.

“In response to his complaints over the balance of the report, I told [Nugal regional police commander] that I have not taken sides but also reported on government’s reaction to the protest of drivers”.

“He didn’t listen to my remarks, he intimidated me, and threatened me with arrest saying I will be detained. I was forcibly hurdled into his car but he shortly ordered his bodyguards to disembark me from the car,” Du’alle added

MAP sees the move as a serious violation to independence of Puntland media and freedom of speech: “It is unfortunate that police commander has intimidated a journalist, the move overshadows the right to freedom of speech and independent media operations in the region. I urge Puntland authority to exercise restraint and remain cautious against such steps in the near future,” said MAP Chairman, Faysal Khalif.

MAP is deeply concerned with the increasing threats and constant intimidation being violations against media workers by local authorities as Du’ale marks the third latest journalist to be mistreated.

In the meantime Golis, Puntland’s largest telecommunications company blocked five websites only this year puntlandtoday.com puntlandnow.com, puntlander.com, galgalanews.com, and jidbaale.com from operating in Puntland following intensive pressure from the government without legal requirement  which is contradict Puntland Constitution .

In light of the prevailing circumstances, the fraternity once again reiterates calls for respect to independence media, and calls on Puntland authority to set greater value on truly democratic state where journalists can operate with ease without fear.