Home » Media Association for Puntland (MAP) appeals support on safety of Journalists on the occasion of Human rights day on 10th Dec 2014. 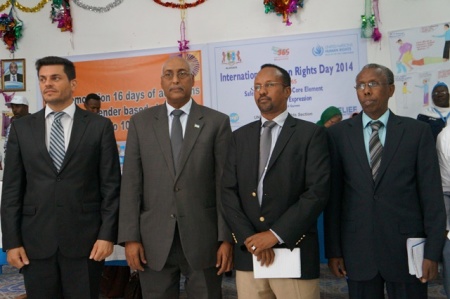 The Media Association for Puntland (MAP) AND Relief International (RI), UNSOM, other UN agencies, Ministry of Women Development and Family Affairs of Puntland, Ministry of Information of Puntland, local NGOs and other International organizations (INGOs) have jointly commemorated the World Human rights day on 10th Dec 2014 in Garowe. the headquarter of Puntland.

All actors of the occasion have shown solidarity and unity to honour the day and highlight the key fundamental rights for women, advocate to improve women rights and safety of Journalists as a key agenda. The theme of this year was “365 days” which means every day is a human right day.

They declared importance to promote, and safe guard the human rights in Somalia and collectively address protection of rights issue on women and vulnerable people, protection and safety of Journalists as a significant aspect on route to freedom of expression and press freedom that contributes to the national development, peace building, reconciliation, dialogue among Somali citizens and lobbying for democracy in Somalia in generally and in particularly in Puntland.

Minister of women development and family affairs, Hon, Aniso Haji Mumin addressed to the event and counted number of key achievement carried by MOWDAFA. She mentioned that her ministry will continue to work on strengthening and improving all as aspects of fundamental human rights of women in the region.

The Head of UNSOM mission in Puntland, Omar Aboudi, has appreciated how the authorities of Puntland is committed on the issue of human rights. He described the UN mandate to advocate, promote the human rights as essential.

Information minister of Puntland, Horn Abdiweli Hersi, has said that his government is committed to implement safety measures to protect Journalists following increased threats and intimidation against Journalists in Puntland. the minister has also welcomed and accepted the proposal of Media union for Puntland over the review and amendments of some articles in the new draft media law of the region.

” I call upon the authorities of Puntland to give space for Journalists to exercise their work and ensure that freedom of expression and press freedom are practiced and respected said by, the chairman of MAP, Faysal Khalif Barre”

Somalia is among world’s most dangerous countries for Journalists to work as 30 Journalists were killed in country since 2012 and in this case, MAP is appealing all media supporters to assist them in ensuring safety mechanisms for the Journalists to maintain press freedom is exercised for better development in common.