Home » Puntland Journalists Commend UNSOM at the finale of the 3-day Journalist Training on Human Rights. 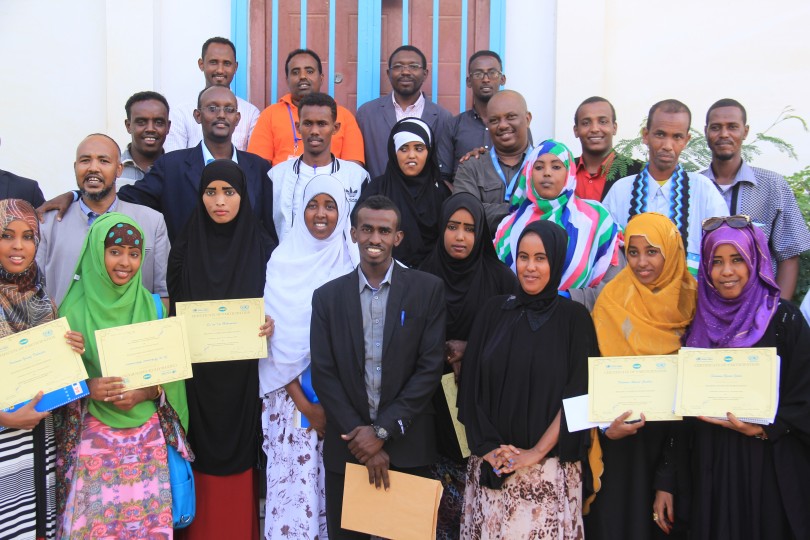 The training, which started on 24th January 2016, was aimed at raising awareness and strengthening the capacities of Puntland journalists and media workers on freedom of expression national and international standards and the role of the media on raising human rights awareness.

The training benefited 25 Puntland Journalists, 9 of which were female Journalists.

MAP chair Faisal khaliif his closing annotations, celebrated UNSOM Human rights sections for the thorough efforts and support it has continuously given to the Puntland Journalists on capacity building trainings, the latest being the just concluded Human rights training which has been a much needed activity. Similarly, the chair thanked the pleasurable handy presentations presented by UNFPA personnel on the ‘’Rights of Women’’ and that of the UNICEF official on the ‘’Rights of the child’’. He also thanked the participants for the dedications shown during the period and encouraged the participants to apply what they learn’t in their daily work.

‘’I would like to thank Ahmed Suleiman and his teammates for their unwavering support on empowering the Puntland media professionals, we are grateful! I also want to cordially thank you the participants for the great participation you have shown for the last three-days and it’s now time to integrate what we learn’t to our daily work, similarly to share the knowledge with your teammates thank you all’’, Said Faisal.

‘’Thank you very much Faisal (MAP chair) for the pleasant words u mentioned, i would like to thank the participants for their commitment and dedication We’ve been conducting very many trainings but this one was the best, because of your commitment to learn that was very encouraging, it is a good opportunity for us UNSOM to meet you all, i hope this engagements to continue in the future’’, he concluded.

One of the participants, Ahmed Salad Mohamed, gave the workshop a nod of approval. “We have learned a lot from the training workshop knowledge on how to ensure personal safety while on the job,” I would like to request for the continuation of this training in the future as it will benefit many journalists who didn’t have the chance now’’, he said.

Representative of UNSOM regional office director Evan Bawala who officially closed the training, prudently acknowledged the excellence of the presentation carried out jointly by the facilitation of UNICEF, UNFPA, UNSOM and MAP. He congratulated MAP and highlighted for its diligent efforts towards supporting Journalism in Puntland by ensuring UNSOM and other partners to support such trainings.

‘’One of the primary objectives of this training was not only to impact this knowledge on you but also to have a group of you dealing with this, and am glad that the speaker that represented you (participants) said that there are so many other journalists around, this is a reminder and a challenge to Ahmed and Faisal to organize such a training to benefit, am confident what you have learn’t will be reflected in your work but I also urge you to work as individuals as well as work as a group support each other and support MAP to ensure Journalism thrives here’’, Said Bawala.

The participants encouraged the UNSOM human rights department to conduct similar training in the future claiming it would benefit Journalists from being informed with the knowledge of human rights, and of the vital role they play in the promotion and protection of human rights in the region.