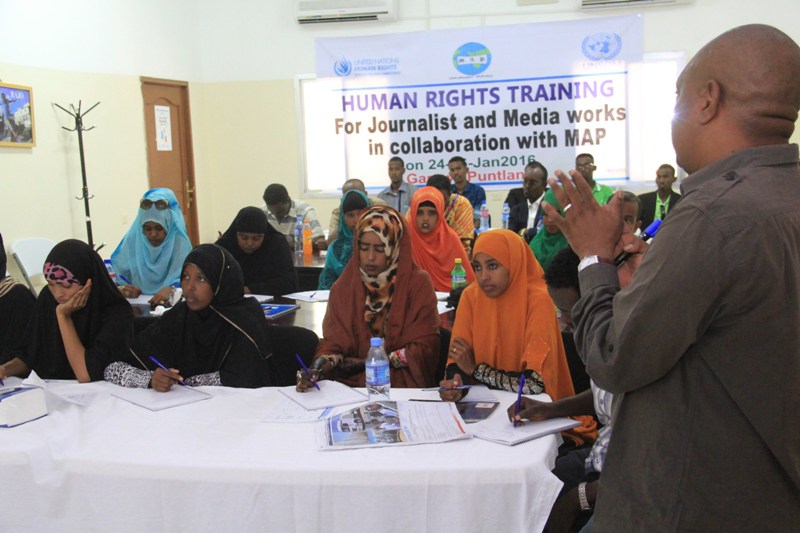 Garowe, Puntland, Somalia: 25th-01-2016:- UNSOM Human rights section in partnership with the Media Association of Puntland (MAP) launched on the 24th January 2016 a three-day training for 25 media workers in Garowe the administrative capital of Puntland.

Participants were drawn from the various media houses in Puntland, whereas, the main focus of this training are of freedom of expression national and international standards and the role of the media on raising human rights awareness. Issues of safety and security of journalists will also be discussed.

The three day workshop will cover national and international legal framework for the media in Puntland, Similarly the event will feature “Bill of Rights”, the rights of citizens under the national legal framework with an open discussion about the national laws that guarantee and protect human rights in Somalia and Puntland in particular, and the obstacles that prevent the application of some of these legal provisions in practice.

MAP chair contributed by advising the journalists on the skills and knowledge acquired as a result of this training to be integrated in their day-to-day activity. ‘’It is of a great importance that the knowledge you will benefit from this crucial training to be incorporated and put in practice on your day to day activities’’, Said Faisal.

Director General of the Puntland Ministry of Information, culture and heritage, the guest of honor on his keynote address welcomed the event’s initiative and called for an active participation from the attending media professionals. ”On behalf of my Ministry I reaffirm our support towards uplifting the Puntland media outlets, it is important that you to be good listeners and get best out of this workshop. I officially open the workshop and wish you a successful training”, Concluded the Mr. Mowlid Abukar!

The workshop would pave the way for future networking and cooperation between the participants and the Human Rights Section, including reports and information sharing.