Home » Puntland: MAP Executes a Two-day Consultative Workshop for Puntland Journalists on ‘’Safety and issue of Impunity on crimes against journalists. 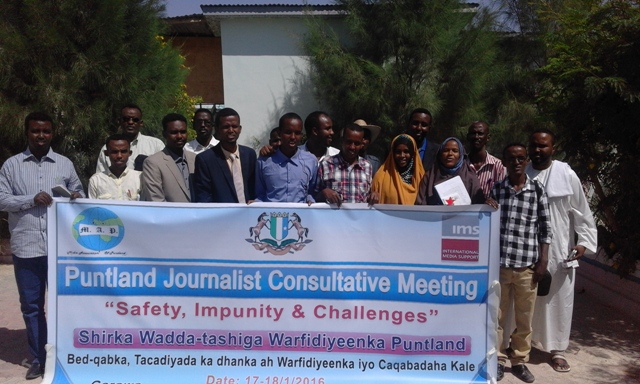 Garowe, January 18th, 2016 – A two day Consultative Process Conference that began on the 17th of January concluded today in Garowe, at the Goobsoor conference hall. Attended by 20 journalists drawn from the various media houses in Puntland, the project funded by the International Media Support (IMS) / Fojo Media institute concluded with successful outcomes.

MAP acknowledges that promoting the safety of journalists and fighting impunity must not be constrained to after-the fact action. As an alternative, it requires prevention mechanisms and actions to address some of the root causes of violence against journalists and of impunity. This implies the need to deal with issues such as corruption, organized crime and an effective framework for the rule of law in order to respond to negative elements.

“We all are aware that collecting and transmitting information is very important in times of political crises. If allowed to work professionally, journalists can make a vital contribution to enhance the peace and reconciliation process in the upcoming”, Noted Faisal khaliif MAP’s chair at his closing remarks. Adding “However, we are increasingly faced with a culture of impunity that endangers professional journalism.”

Puntland journalists identified a number of challenges and obstacles that compromised their safety in the course of their work. These also included lack of or derisory facilitation, low wages, working under managers who were not trained journalists, and, in some extreme cases, taking instructions from unethical editors who maintained alliances with news sources, especially politicians and clan based interests.

The media continue to be potential victims of danger due to the lack of knowledge on the dangers and risks that affect journalists in Puntland, the limited understanding of institutional capacity needs, the lack of platforms for dialogues with authorities and the law enforcement, as well as the lack of a common concerted effort to combat these crimes of opportunity and impunity.

Without freedom of expression, and particularly freedom of the press, an informed, active and engaged citizenry is impossible. In a climate where journalists are safe, citizens find it easier to access quality information and many objectives become possible as a result.

The journalists were undivided in their approbation that the police, judicial officers, prosecutors and lawyers be taught on how to knob or follow up on any threats and attacks on media practitioners. Similarly they recommended that state officers be sensitized about the importance of the work journalists do in the development of the country. At the same time, those who attacked or threatened journalists should be punished promptly.

Superior security management within media houses would be more cost efficient for media owners in the stretched period than the financial implications of ad hoc responses to emergencies and actual attacks and injuries – an example examined was the structure on the security checks status of most of the Puntland media outlets premises not being in a good shape as far as safety is concerned. Similarly the need of ‘’Personal safety tactics and digital security journalism capacity building was highly’’ recommended.

Journalists were equally vigorous that the lack of effective editorial policies that enhance quality and conflict sensitive reporting has been of a wide concern. They said they felt most vulnerable and open to threats or attacks during political differences periods and while covering sensitive stories and or combats – An example was the Galkayo combat which saw a degree of partiality in reporting of the dispute.

MAP’s Recommendation to the Puntland Government

Conduct in-depth and judicious investigations and trials for crimes against journalists. Ensure all investigations extend to the crime’s perpetrators, not only the gunmen.  The Puntland government should make adequate resources, political support, and security available for those investigations.

Awareness rising will promote greater public understanding of press freedoms and awareness of crimes and intimidation that media face in their line of work is a great way to launch public concern and mobilize wider public engagement on the subject.

Finally MAP urges both the Puntland and the Somali Federal authorities to take all the necessary measures – through legislation, protection mechanisms, and new adequate resources – to ensure that investigations and trials relating to crimes against journalists are undertaken.