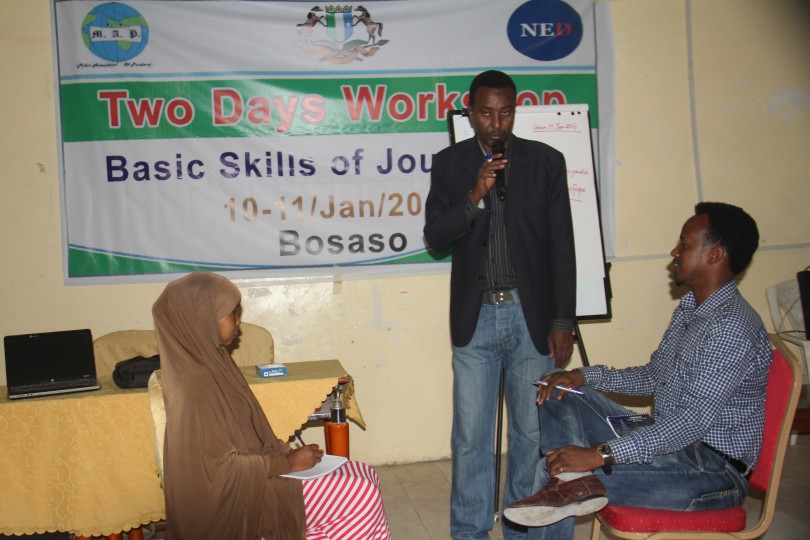 Bosaso, Puntland, Somalia, 12th/01/2016;Two day training from the 10th-11th of January concluded yesterday in Bosaso the regional capital of Bari region. The seminar was attended by thirty journalists drawn from an assortment of media outlets across the Puntland regions which was organised and executed by the Media Association of Puntland – MAP in-line with the project intended to promote media sustainability in Puntland modestly funded by the National Endowement for democracy – NED.

This workshop, titled ‘’basic skills of journalism’’ enhanced the Media practioners skills in writing, editorial detail and quality control during content development. During the theoretical and practical sessions, Participants reviewed research skills related to story development and preparation for interviews and discussion on participant understanding of media ethics, including the concepts of objectivity and impartiality in reporting with new concepts such as the importance of focusing on spreading information to the public; best ways to hold interviews, breaking the conventional manner of handling media.

Engineer Mohamud Warsame (fuumbe) whom was the guest of honour on both opening and the closing of the event, commended the Media Association of Puntland in its efforts and representations towards building the capacity of the Puntland media practitioners;
He welcomed the participants and urged them to concentrate first by learning the knowledge this workshop carries and later gained knowledge to be integrated in their profession but also to be shared with the other colleagues who may not have made it to the workshop.

The Bari regional representative in his closing speech remarks recommended ‘’Well done MAP, I’m looking forward towards future relevant collaborations, I acknowledge your efforts, Let me also take this opportunity to ask the Ministry of information to support MAP in its struggle to promote the Puntland media’’, Said Fuumbe.

Mohamed Dahir Yusuf noted ‘’I urge the participants to fully take advantage of what they have achieved in these two days and make sure that knowledge is spread amongst their fellow newsroom mates during their day-to-day activity, i fully welcome the comments from the participants on their proposal for the future activities to expand the duration of the workshops and will consider it as a priority. Thank you for your active participation and hopefully you will make the promise real by putting the acquired knowledge into your work, mentioned MAP’s head of the training Unit.

These heinous actions have adversely affected the independent media and restricted the Somali people‘s access to independent news and information. Many journalists, reporters and other media staff fled to neighbouring countries leaving the sector with considerable human resource challenges. These high personal risks discontinued experienced journalists from active practice in Somalia. The sector attracts, only, low skilled labour due to the low wages and the dangerous repercussions.

MAP calls for Justice on the Somali media law
Somali President Hassan Sheikh Mohamud has signed into law a controversial media bill that aims to regulate the beleaguered media industry, after the government dismissed calls by journalists to review the bill.

The journalists had complained that the bill was passed by Parliament without independent input from the media.
The 42-article new bill, earlier passed by the Cabinet and Parliament, is viewed as restrictive as it gives authorities a wide-range of options to prosecute and arrest journalists for disseminating ‘false’ news. It also slap heavy fines on journalists and media houses that infringe the stipulated law. Signing the bill into law on Sunday 10th, President Mohamud said he had taken the decision after considering clauses in the constitution and the endorsement letters from the Parliament’s Speaker and the Prime Minister, which highlighted the need for media law to “safeguard the country’s culture and the reputation of the Somali people”.

The Media Association of Puntland calls for the entire Somalia Media fraternity and the international community media and rights groups to jointly demand for rectifications and amendments on the acute articles of this ambiguous media law.

The consequences of impunity run deep as they lead to media’s self censorship, which reduces citizens’ access to important information on issues of public interest, thereby diminishing transparency and accountability in governance. Under the rule of law, fundamental rights must be effectively guaranteed.