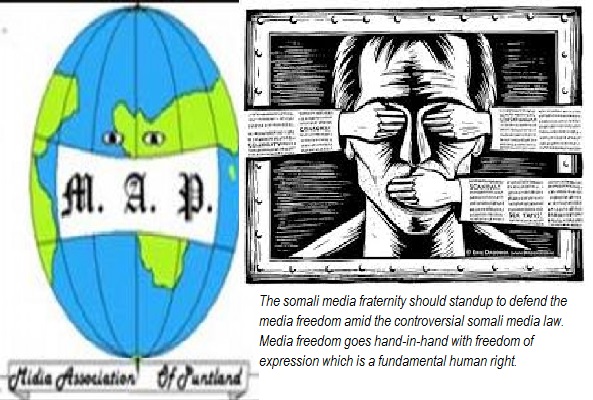 “We are greatly concerned for the freedom of the media and journalists ability to report in Somalia should these laws ensue with the final approval of the Somalia’s Federal President Hassan Sheikh Mohamud’’, MAP’s chairman Faisal khaliif said, ‘’if the president approves this law in its current form, this would indeed present an atrocious outcome that would have negative impact on the Somalia media practitioners and promote impunity on crimes against journalists. Overly punitive measures against the media for blurred offences will have a chilling effect on the media’s independence, the fact that the freedom of the media is crucial to the freedom of expression’’, added MAP’s chairman.

Questionable provisions
A rule of strict liability for all false statements is particularly unfair for the media, which are under a duty to satisfy the public’s right to know where matters of public concern are involved and often cannot wait until they are sure that every fact alleged is true before they publish or broadcast a story. We have a number of concerns with regard to these restrictions in the law.

Article 5 provides; Breaches to this media law by journalist or media outlet will at first get a warning letter, face fines calculated in Somali shillings worth US$500 and US$3000 – This implies to breaches that are not referred to as criminal cases, if the breach is considered a criminal case then this will be transferred to the authorized court whom will take over the case.

This provision in article 5 at first doesn’t define if the warning letter and the fine charges occur at once and or not, secondly the provision doesn’t mention who handles the case of the so called ‘’breaches’’, and who is the authorized body that will examine the breach as a criminal case or not.

Article 14 provides: Establishment of the Media council: The media council shall be called the Somali Media Council, which will comprise of 9 nine members drawn from; State Media (3persons), private media (3persons) whereas the remaining (3persons) come from civil society groups explicitly; National Human Rights Commission, Somali National Women Organisation and Somali lawyers Association.
A clause under the same article defines the nomination process of council as follows; Ministry of information will propose the council nominees to the cabinet whom will do the preliminary clearance, followed by final approval that will be issued through a presidential decree. The dismissal of the council members will undergo the same procedure.

Under article 16; Media houses, including newspapers, will be registered by the Ministry of Information and must obtain licences from the Ministry. There are no specifications on sums of the registration fee and that of the annual fee.
MAP’s concern is that the provision in this article 16 may be open to maltreatment through the refusal to register media outlets.

We recommend, therefore that the registration requirement for newspapers be reconsidered. If it is to be retained, it should be transformed into a purely technical format, administered by an independent entity that merely acts as a public register of print media outlets.

Article 18 provides; Journalist will be registered by the Ministry of Information after being examined by the Somali media council on professionalism based on journalism knowledge. Journalists who make it through the test will receive a recognition letter from the Ministry of information. Similarly article 35 narrates; a journalist shall be any person who has a university degree in journalism.

A common misconception about the accreditation system is the notion that it has a ‘permissive’ function – permissive in the sense that a government or other regulatory body has the right to grant, deny or revoke a journalist’s accreditation. By applying the same rules to accreditation as for a work permit, the government exercises undue control over journalists. Journalism is an open profession.

No legislation should be adopted that imposes a compulsory licensing mechanism for journalists; that sets entry requirements for the journalistic profession, whether educational, or otherwise; or that allows for the imposition of heavy sanctions with only a limited right of appeal.

Journalism is the primary and principal manifestation of freedom of expression of thought. For that reason because it is linked with freedom of expression, which is an inherent right of each individual, journalism cannot be equated to a profession that is merely granting a service to the public through the application of some knowledge or training acquired in a university

Article 25 states; Ministry of Information together with the Somali media council in consultation with media organisations shall prepare code of ethics of journalism which will state rules that will include respect for Islamic religious and good culture of Somalia, accuracy of news & programmes, and protection of confidential sources unless court orders confidential source to be revealed.

According to the Somali media law, a court can coerce a journalist to reveal his/her confidential source, this should be removed automatically, Journalist sources should be a ‘’no go area of discussion’’ and be respected. Protection of journalistic sources is one of the basic conditions for press freedom. Without such protection, sources may be deterred from assisting the press in informing the public on matters of public interest. As a result the vital public-watchdog role of the press may be undermined and the ability of the press to provide accurate and reliable information may be adversely affected.

The Media Association of Puntland calls for the Somali Media fraternity to join their critical voices to transform on the controversial media law, it’s mandatory for the media associations, Journalists across the nation to defend the their positions in promoting the media freedoms.

Similarly the international community, Media development support partners and human rights defenders should analyse and examine the Somali media law, there is a crucial need that you feedbacks are spoken out to the concerned authorities. The international community should feed the Somali federal government with expertise on media regulation standards and push for amendments on the articles in the Somalia media law.

To the Somali Federal President; His Excellency Hassan Sh. Mohamud – Journalist in Somalia continuously undergo harsh conditions, 29th December 2015 the Media law passed by the Somali federal parliament sends negative message to the Somali media and the public at large. Mr. President we call you not to sign the bill as it clearly violates the media freedom and freedom of expression.