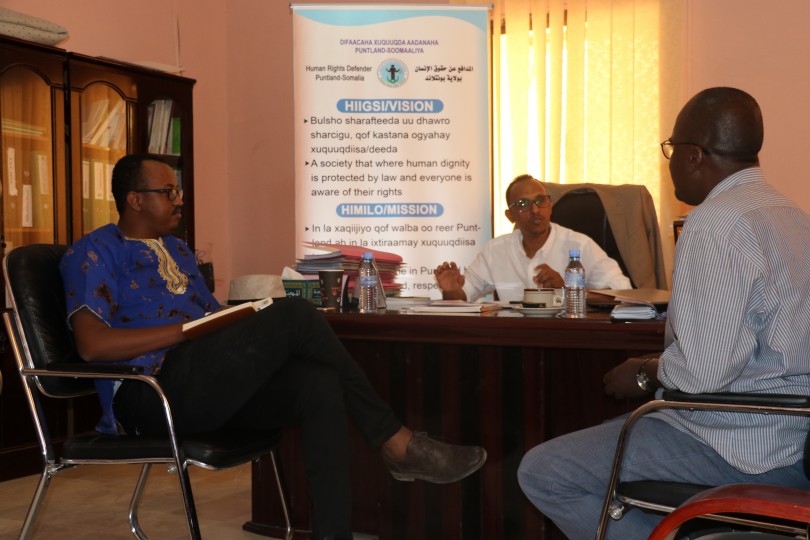 Garowe, September 10, 2018: The Media Association of Puntland (MAP) in a joint statement together with the Puntland Non-State Actors’ Association PUNSAA and the Office of the Puntland Human Rights Defender OPHRD have jointly called on the government of Puntland to uphold freedom of expression rights of journalists and ordinary citizens in the country.
———-

Following a tripartite meeting held at the OPHRD office in Garowe on the September 8, attended by the chairpersons of the three organizations named above, in which the central theme of discussions focused on the status of citizen’s rights on freedom of expression while examining the recent attack by the state targeting decent voices just for expressing their opinions, the meeting vehemently condemned the silencing of citizens in expressing their views.

Generally, democracies seek to expand freedom of expression, especially in political speech or situations, somewhat than to edge it, but this isn’t always the case as witnessed in the past and recent weeks in the Puntland State of Somalia. The very recent case that was significant and a direct attempt to intimidate and silence decent voices was the latest was the arrest of Mohamed Darwish by local authorities for posting his picture holding an A4 paper in which he wrote a note saying ‘’Forum for the inter-state council leaders is illegal’’ referring to the just concluded inter-state conference held in Kismayu which was attended by the Somali state leaders.

Darwish was arrested and kept in custody for 30hours in Garowe and was released on the evening of Saturday 8th, 2018.

MAP Chair slammed the authorities for using excessive force towards it’s own citizens while bypassing legal procedures of arrest warrant and that of the pre trial detention.

”The arrest of Mohamed Darwish sends a chilling effect and undermines the fundamental human rights of freedom expression, authorities must not intimidate their citizens and should allow the public to air their views unconditionally without fear of reprisal” Said MAP chair Mohamed Dahir Warsame.

Mohamed Yusuf, also noted that ”Everyone is free to express his/her opinion and can publicize it” said OPHRD chair.

”I call on the Puntland State to uphold the rule of law and stop cracking-down those who express their views on the political waves” Said Faysal, Chair of PUNSAA.

Through this statement the MAP, PUNSAA and the OPHRD call on the Puntland State authorities to stop harassing, intimidating and arbitrary arresting of citizens just for expressing their political views and or opinions. Similarly, the organizations have called on the Puntland State, through this statement to stop-bypassing-legal-procedures on an arrest of citizens and allow the public to express their views.

The Puntland Journalist Security, a voluntarily selected group aimed at building confidence between the Puntland media practitioners and police in collaboration with the Impunity Watch (IW) section of the Media Association of Puntland (MAP) are also put in alert to closely monitor violations against Journalists as we approach the Puntland Presidential campaigns and elections set for January 8, 2019.