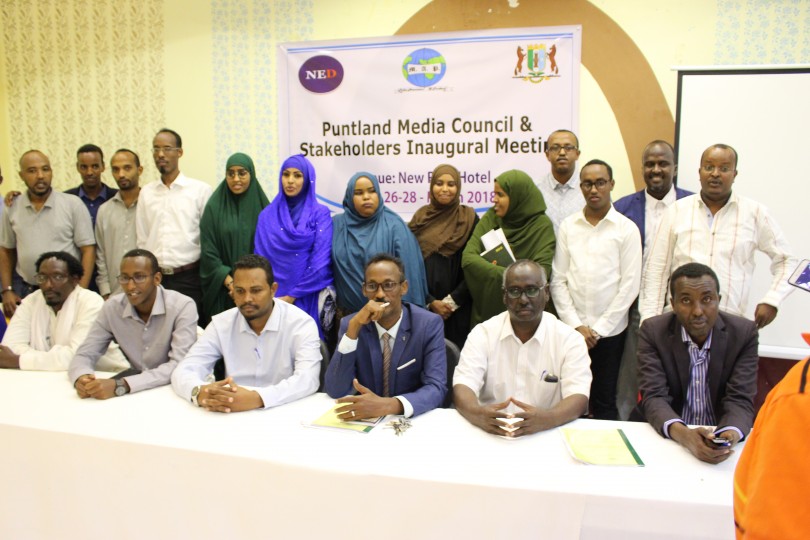 The PMC, with the stated aim of maintaining high standards of ethics, will be responsible for the accreditation of Journalists, setting media standards (code of ethics), evaluating-promoting ethics among journalists and handling public complaints against the Puntland media.

The Puntland Media Council (PMC) inaugural meeting held in Garowe at the New Rays Hotel from 26-28 March 2018, organized under MAP’s ”promoting media sustainability in Puntland project” Supported by the National Endowment for Democracy (NED) ended in a successful manner.

At the opening of the meeting on March 26, which was chaired by the Puntland Minister of Information, Communication, Culture and Heritage Hon. Abdi Hirsi Ali (Qarjab), the MAP chair – Mohamed Dahir Warsame at his opening speech thanked the participants for coming to attend this vital conference, he introduced the participants to the objectives of the meeting.

The MAP chair said ”Today we are here to join the democratic world by establishing the Puntland Media Council, the Puntland Media Law’s (2016) on it’s Articles(19 to 25) provides the establishment of a Puntland Media Council, and that is the main objective of this meeting” said Mohamed.
Talking on the role of the MAP in organising the Puntland Media Council inauguration, the chair thanked the Minister of Information Honourable Abdi Hirsi for his cooperation and facilitation to the processes especially on the nomination of the council’s member. The chair said  “We would like to highlight that without the cooperation with the Ministry information this process couldn’t be possible, thank you very much, Minister, for your enthusiasm and willingness to allow the MAP to independently lead the process”

The Chair mentioned the supporting partner being the National Endowment for Democracy (NED) and thanked NED for their continuous support since 2015 aimed at promoting Media Sustainability in Puntland.

Honourable Minister Abdi Hirsi who was the chief guest at the inaugural Meeting for the Puntland Media Council gave a speech on the importance for Journalists’ to maintain high ethical standards and called for the appointed Puntland Media Council members to perform their duties with integrity, neutrality and free from any type of bias that will hurt their credibility.

He said  ”I would like to thank MAP for their Job and their role in promoting the Puntland Media, Abdi added the Puntland Media Council has got an important role, I expect that they will perform their duties to the most efficient way, I wish you success on your future duties” said Hon. Abdi Hirsi

After the opening speeches of the council’s inaugural meeting, MAP’s former chair Faisal Khaliif was awarded a certificate of honour for his service during his tenure from 2014-2017. Major achievements have been the reform of the Puntland Media Law, promoting the safety of Somali journalists and strengthening the MAP and international donor relations.

During the three days of the meeting, a draft of the Puntland Media Council’s By-law and Code of ethics which was prepared by MAP hired consultant was presented in the meeting, commented and discussed thoroughly amongst the participants.

On the March 27, the second day of the meeting, the council elected Nur Shire Osman as its chair, Mowlid Abukar Vice- Chairman, Burhan Ahmed Dahir -Secretary-General and Faisa Abdullahi as the treasure. The other appointed members of the Puntland Media Council are Mohamed Ahmed Shikhdoon, Shiekh Saed Ahmed and Dahir Aflow.