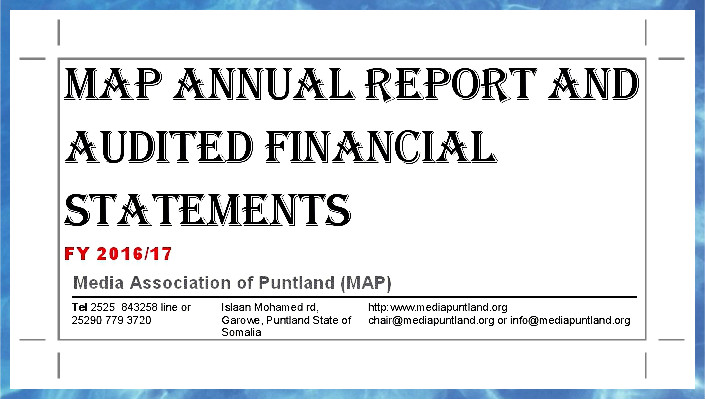 Garowe Puntland, June 07, 2017: The Media Association of Puntland is delighted to introduce its first annual report with the Strategic Report and Financial Statements for 2016/17. The Media Association of Puntland (MAP) remains on course as it continues to grow from strength to strength. Its obligation has remained unique given that it is one of the outstanding organizations promoting and defending media freedoms and rights of journalists in Somalia.

This is an annual report containing major activities and achievements accomplished by Media Association of Puntland – MAP –  the year ended March 31st, 2017. The primary objective of the report is to disclose overall core and partnership activities, learning, and outcomes of the organizational initiatives and demonstrate its track record and competence to execute ideas aligning the key themes of the organization. The report is expected to serve as a well-documentation of the key efforts of the organization to attain its objectives and a consolidated contribution Media Association of Puntland made to the country’s Media development objective.

MESSAGE FROM OUR CHAIR!

MAP made a difference in 2016 – thanks to each and every member journalist, media firm, staff member, technical consultants, activists, lawyers, our diligent staff and most importantly our donors.

We contemplate that you’ll be proud of all that was accomplished, and perhaps just as importantly, revel in how our work was accomplished – that is, with valued educational improvements for journalists, strategic partnerships to expand journalists access to information, relentless advocacy for press freedom, a significant push for policy review as well as courage, tenacity, and a spirit of solidarity in a dangerous environment of work. MAP will continually seek out opportunities to respond to the media sector’s need for justice, freedom, safety and development for the flourishing of our nation.

In 2016, MAP did well financially, due to the fact that many international agencies contributed significant support to MAP’s solicitations for funding. All board and staff members appreciate an improved financial scenario, as this allows us the opportunity to direct more of our focus to the promotion of media freedoms, safety, and access and justice concerns in Somalia.

We would like to specifically thank the National Endowment for Democracy (NED), IMS and Fojo Institute media institute and the Free Press Unlimited (FPU) for their generous support

2017 promises to offer enhanced opportunities for MAP to deepen our efforts to bring a better environment for journalists in Somalia through increased negotiations on safety and protection of our Journalists; establishing the Puntland media council, and improving government resolve to end violence and impunity against Somali journalists. Enormous activities MAP will be proud of this year 2017; the development of the Somalia Safety and Protection manual, Establishment of the Puntland Media council and last but not least the study of ‘’Gender in the Puntland Media Landscape’’.

I would like to make a one BIG announcement for 2017:  With no doubts the MAP board of directors have made tremendous undeniable achievements that have widely promoted MAP’s mission to strive to promote and defend freedom of expression including the media freedom by developing the media and journalists in Puntland. Despite that, we are set to hold a fair, transparent and a democratic election late this year and will be inviting our general assembly (GA) members for a GA conference that will elect its new leadership of nine Executive Body members.

Four positions are chosen by election out of the nine members of the Executive Body. Precisely these positions are; Chairperson, Deputy Chairperson, Secretary General and Treasurer General. MAP will officially announce the specific dates on when the GA will be held and will depend on the availability of adequate funds.

On behalf of the board and staff, we would like to thank you for your faithful participation in MAP and its work – and we invite you to collaborate with us in the exciting year ahead!

Please click on the below link and take a minute to read the pages inside this Annual Report to get a sense of how your efforts to improve media freedoms and capacities for Somali journalists joined ours.