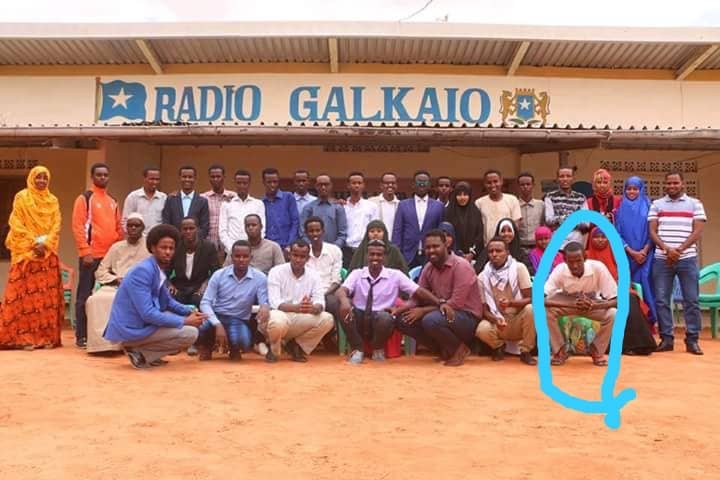 Garowe, September 19, 2018: The Media Association of Puntland (MAP) vehemently condemns the murder of Journalist Abdirizak Saed Osman, a photo journalist working with the Galkaio’s radio ”Codka Nabada”, motives not clear.
———-
The deceased was attacked by unknown persons armed with knives and sticks around 23:00hrs last night en-route to his home. Preliminary police investigations revealed the deceased was stabbed in the left front lower region of the chest near the heart, and in the hind left-side arm with a sharp objects (Knives), additionally the deceased was beaten with walking sticks and wounds sustained from the beating was visible on several parts of his body.

Abdirizak was rushed to the Galkaio’s general hospital, however it wasn’t possible for the hospital to save his life. Abdirizak Saed, aged 30yrs, passed away today at the hospital from “internal bleeding” as a result of the two stab wounds.

MAP chair, Mohamed Dahir Warsame,who was in contact with the regional authorities especially the criminal investigation department and the Mudug region’s office of the police commissioner was informed that the police has arrested 4-suspects and are being held in custody, allegedly linked to the murder.

The Galkaio’s police chief informed the MAP chair in a phone call this morning  and said ”We have already arrested this morning four suspects and we are thoroughly investigating the murder case, he added at the crime scene we collected broken walking sticks, allegedly utilized as part of the assault” Said Colonel Ahmed Mohamed Afrah.

MAP declines conclusions or assumptions already being reached/discussed by the public that the perpetrators were bandits whom their interests was money or to steal lucrative materials such as mobile phones, is to early and misleading. The fact is that reliable sources have confirmed to MAP that the deceased’s mobile phone wasn’t taken and didn’t have any lucrative equipment on him by the time of the incident that could attract thieves to attack him.

“Mudug’s regional authorities alongside the Puntland’s State administration must meticulously investigate Abdirizak’s killing, including whether his Journalism profession could have been the motive’’, said MAP chair Mohamed Dahir Warsame while in a briefing with the MAP team on the murder held at the MAP’s office this morning.

MAP chair responding to those who are already reaching conclusions on the motives behind the murder said ‘’we can’t just reach conclusions such as bandits being behind the murder, we seek truthful investigations and culprits to be brought to justice without delay once found”

The Media Association of Puntland is shocked by the horror and sends it’s sincere condolences to the family, relatives and friends on the loss of our brother the late Abdirizak. MAP in collaboration with the Puntland’s Journalist Security committee (PJSC) are cooperating on the next steps of the murder with focus on pushing a swift and independent investigation on the murder case.