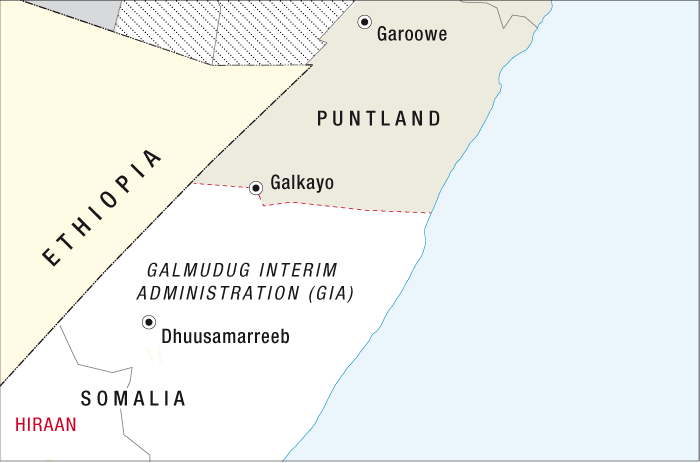 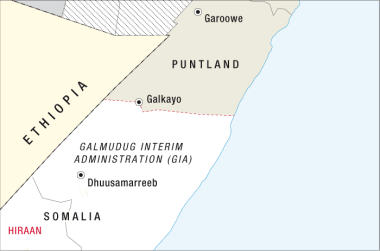 Garowe, Puntland; The Media Association of Puntland, MAP, in a press conference on Monday has expressed serious humanitarian concerns over the unsettled conflicts in Gaalkacyo between the Galmudug and Puntland states of Somalia – causing huge influx of civilian displacement fleeing from the exchange of heavy machinery used by both sides.

The Media Association of Puntland, MAP, deprecates the fight that has forced out innocent civilians to flee from their homes at a time Somalia faces severe droughts due to delays of the rain season.

MAP chair speaking at the press conference has called for the warring sides to cease the warfare immediately and reach a solid agreement that features concrete foundations promising that this will not occur again in the future whatsoever.

‘’It is a pity to see that innocent poor civilians suffer and flee their homes due to fights perpetrated by individuals, as we speak now a number of families are sheltered under trees – this is inhuman- irresponsible for those driving this combats and this should not be tolerated. We demand, both Galmudug and Puntland authorities to immediately halt any further fight, and support the efforts of negotiations for the sake of the civil lives, Said the MAP chair Faisal Khalif Barre.

While warning the Puntland and Somalia media outlets on tolerating or publishing hate speeches from politicians of the warring sides, MAP has called on the Somali Media fraternity to promote peace and avoid any type of news that could promote and escalate the conflict. MAP has established an online/offline unit that will investigate and observe the hate speeches published or broadcasted by the media outlets across the country and will deal with the findings adequately including possible severe undisclosed measures.

‘’As a matter of fact the media has a significant initiative as a gatekeeper which sets the agenda for public discourse, filters the issues which promote peace, against those that don’t, and tries to maintain a balance of views. However, such a gatekeeper initiative is undermined by the fact that the media likes to portray themselves as ‘balanced and fair,’ even when they privately seek to promote a particular ideological set of ideas and limit the public’s exposure to a wide array of information – Henceforth – we call the media practitioners across the nation to promote peace at all levels’’ said MAP chair.

Social media provide unique opportunities for individuals to articulate their opinion, get their voices heard, and draw public attention to issues that need to be addressed. But social media, too, are not without problems. Social media often spread unfounded rumors, half-truths, and can also be used to mobilize people to commit acts of violence. MAP warns the Somali Media fraternity users of the Social media to post articles or messages that could escalate the situation in Galkaio.

The Media Association of Puntland, MAP, through it’s chair alarms to the international Humanitarian organisation for a quick need to respond on a the displaced families as a result of the Galkayo conflict. MAP will be sending hopefully a fact finding mission to Galkaio to gather concrete information on how the combats have impacted the human lives including the humanitarian situation.

According to UN OCHA report, a spot check by humanitarian organizations and local authorities confirmed that some of the IDP settlements and host communities adjacent to the Garsoor area are vacated. In north Gaalkacyo, Al Amin-1, Afartakare, Kulmiye, and New Doonyaale IDP settlements are also vacated. Reports indicate that Qoraxay and Midnino IDP settlements in South Gaalkacyo are also vacated. Partial displacement of IDPs has been reported in north Gaalkayco, including Al Amin-2, Bulo Kontrol and Warshad Gallay) and Bulo Jawan, Bolo Noto, Ceel Gaab and Hiraan-1 in South Galkayo.

Earlier a peace agreement reached by clan elders and the business community on 9 October failed to hold and fighting erupted less than 24 hours after it was signed. The interim peace agreement had three key points: (1) an immediate cessation of hostilities; (2) an immediate withdrawal of armed personnel from the area of contention; and (3) discussions on peaceful resolutions of the issue to continue. A technical committee established to facilitate further negotiations between the two sides to address the root causes of the conflict is yet to make progress.