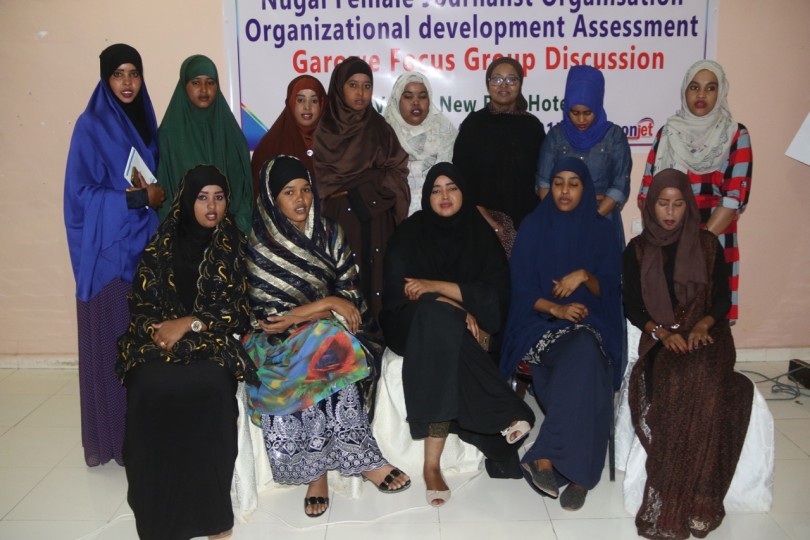 March 28, 2017; The focus group discussion (FGD), organized by the Media Association of Puntland, a program under the Free Press Unlimited supported project titled ‘’Assessing Gender landscape in the Puntland Media’’ (AGLPM), gathered over 20 participants of the Nugaal Female Journalists organisation based in Garowe the administrative capital of Puntland. The interactive meeting was held at the New Rays hotel on the March 23, 2017 in the evening.

Organizational Development Assessment Tool (ODAT) tailored for the Puntland gender study is a diagnostic tool designed to help determine the organisational capacity of Regional Female networks in Puntland , in order to promote and develop the performance of organizations as well as develop staff knowledge and skills.
The moderator gave structure to discussions on a wide range of pre-agreed topics and allowed the participants to lead debate.

Focus group discussions held interactive session that allowed for innovative solutions to address the challenges highlighted. One resounding recommendation supported by the forum was to reform and reactivate the Nugaal female journalist organisation (NUFJO), it’s vision and overall, but at first call for a general assembly that will gather the entire female journalists in Nugaal region – this GA will elect key board missing positions of NUFJO.

Even though majority were young or fresh female journalists, we were still surprised by some of their responses and the things that they said mattered most to them. It goes to show that no matter how well you think you know your audience; you should never try to second-guess them, said the event’s moderator Halima Hassan.

Nugal female Journalists Organization (NUFJO) is non-governmental,non-political and also non-profit seeking organization established in September 2012, by the first batch of SHIRWAC journalism institute,based on the extensive female journalists organizations needs that has the capacity to advocate the women in every aspects and Empower women from the grass-root level. The first group of media graduate girls established NUFJO to advocate female rights in general, improve the capacity of female in journalism and seek an employment opportunity,defend themselves and others from any illegal action,  increase the number of female media professional in the region.

A.Existence of Board – NUFJO has established a board in 2012 – however the board is non-existent at the moment. Participants confirmed that apart from the NUFJO chair who was present in the Focus group discussion, the remaining board members weren’t present in the region and thus NUFJO do not have an operating board. With that NUFJO will seek to reorganize their members and call for a General Assembly that will elect the vacant positions.Participants of the FGD agreed on the need to elect new members.

B. NUFJO’s Overall Strategy/Mission:
Strategy/ Vision/Mission/Values; NUFJO’s Mission reads -Empower woman to be self-reliance in protecting their rights, promote equality to opportunity, fair treatment to all and participate in the decision making and the implementation of all issues that affects their lives through awareness, dialogue, women media programs and role modeling.

However, NUFJO in practice has no strategy or influence over day-to-day and has got a little shared understanding amongst it’s members.

This is a glance overview of the outcome of the focus group discussion. It is important to note that the abscense of the board members of the NUFJO clearly indicates the status of operation of the organisation. NUFJO will have to gather it’s members and elect new flag bearers.The focus group discussions did not only assess NUFJO capacities but also highlighted the importance of networking and solidarity among all female journalists in Puntland and Somalia in general.

The Media Association of Puntland (MAP) in collaboration with TAYO centre for media excellence will organise similar focus group discussions in Galkaio and Bosaso targetting female journalists organisations existing in those locations. Already ongoing is the survey questionaires targetting 116 respondants from Garowe, Galkaio and Bosaso. Respondants are drawn from media practitioners 9 media outlets – 3 media outlets from each location.