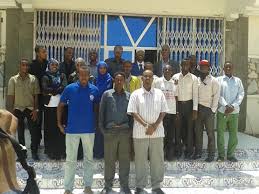 Garowe, 09 Oct 2014: Media Association of Puntland (MAP) cordially welcomes the agreement reached by 14 media workers and the management of Puntland Television, a government-run station on Tuesday.

Some fourteen journalists and other media workers have on 25th Sept went on strike, demanding an unpaid salary of a month and allowances.

The deal comes after a week-long negations brokered by MAP and Garowe district administration who later urged workers to return to the station.

Puntland information minister Abdiweli Abdulle Indhaguran who is the chairman of the committee confirmed that the Televisions workers will go back to work on 08 Oct, adding that further investigations on the matter will be carried out.

Eventually, the journalists and other media workers have officially resumed work on 7 Oct 2014,