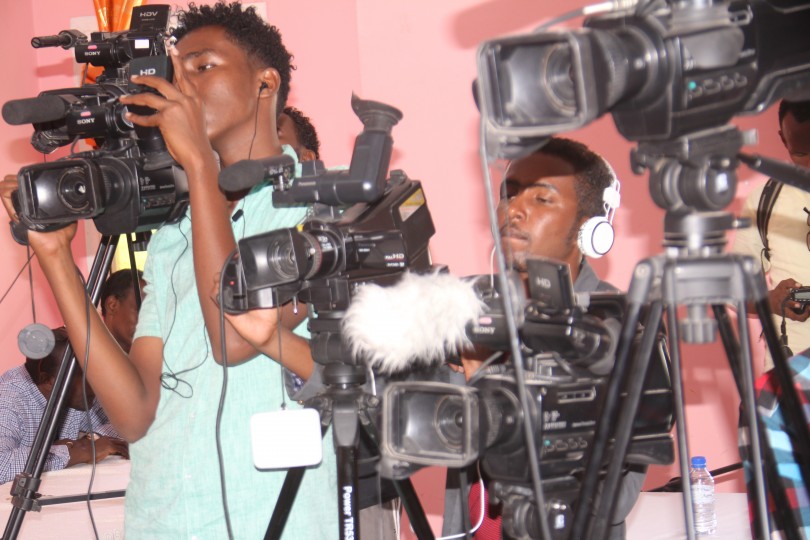 Following the Somalia Supreme Court’s verdict that was announced on February 10th 2016 over the national union of Somali journalists (NUSOJ) secretariat that came under wide criticism from the Somali Media fraternity across the country, ensued divisions amongst the media practitioners in Somalia.

To patch up the matter, a nine person commission to resolve the controversies was appointed; part of this committee is a member from the media Association of Puntland – MAP, and this is the Association’s chair Mr. Faisal Khalif Barre.

Garowe Puntland Somalia, Feb 17th 2016: Consequently, on the 15th Feb 2016 at a vibrant farewell event held at the New Rays hotel in Garowe that was attended by Journalists, Media owners, chief editors and the Puntland Minister of information extended their recommendations and advises to MAP chairman.

The event that was meant to show support to MAP chairman prior to his trip to Mogadishu, called for the two grudging NUSOJ sides to show lenience and come to concurrence in the interest of the Somali Media fraternity.

Participating groups similarly warned the continuation of this intricacy may negatively impact the ‘’fourth estate’’ existence and lead to fractions of the Somali media fraternity, a notion that will affect the nation’s image, united voices and downgrade the efforts of promoting freedom of expression in Somalia.

Officials’ attending the farewell also advised khaliif to play as a role model and avoid in taking sides of the disputes urging him to remain neutral and wished him a successful Mission. MAP chair was informed to count on the full support of the Puntland Media fraternity and the civil society at large, and on the event that he faces difficulties he should always comeback for consultations prior reaching controversial decisions.

Chairman of the Media Association of Puntland – MAP Faisal Khalif Barre, who is a member of the commission appointed to style guru the NUSOJ controversy pledged to play a neutral role and positively contribute towards the reconciliation process. He also noted to represent the Puntland Media Fraternity and will defend the due rights of the Puntland Media Sector.
The Media Association of Puntland confirms the Safe arrival of its Chair to Mogadishu on the 16th of February 2016.