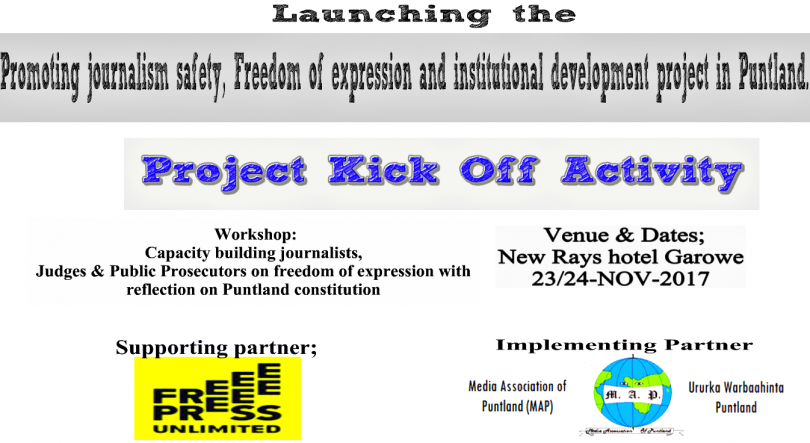 Garowe, November 22, 2017: The Media Association of Puntland is delighted to announce the launching of the ‘’ Promoting journalism safety, Freedom of expression and institutional development project Project in Puntland’’, designed to promote free and fair Journalism practice, the safety of journalists in the Puntland media.

MAP chair on Tuesday speaking in a meeting with project team at the MAP HQ office Garowe said ‘’While we appreciate the Free Press Unlimited (FPU) for supporting our initiative, – we are set to engage effective dialogue with government relevant stakeholders at creating an enabling environment for media practice in Puntland – He added – Through this project we will campaign to end impunity for crimes against journalists, raise awareness on newly enacted Puntland Media Law (2016) & importance of freedom of expression, and demand an end to gov’t officials illegal approach and bypass of legal procedures on arrest, search and warrant while dealing journalist cases’’ said Faisal khalif

The Puntland media continue to be potential victims of danger due to the limited government institutional capacity needs, the lack of platforms for dialogues with authorities, Judiciary, law enforcement, as well as the lack of a common concerted effort to combat these crimes of opportunity and impunity.

Through this project MAP will bring together the Media, Civil society groups, Puntland Judiciary and law enforcement executives to review the UN global action for dealing with journalism safety and Issues of impunity and adopt an Action Plan for joint security collaboration to improve journalist safety and end impunity. The Plan will hopefully bring together all the stakeholders, to solve issues challenging the safety of journalists and impunity to media in Puntland and establish a Puntland Journalist security committee.

MAP Project Manager, Ibrahim Abdi explaining the Puntland journalist security committee at the project implementation work plan deliberations meeting late on Tuesday at the MAP HQ in Garowe said ‘’The committee will be formed under this project and members will be voluntarily drawn from and across the distinguished project stakeholders participating the dialogue meetings’’ He added, their primary task will be building self-confidence amongst media practitioners in reporting threats they face; committee will also have the capacity to receive cases of threats from Puntland media practitioners and speed up investigations on such cases while liaising with the police and intelligence agencies”

MAP believes establishing a common plan of action for dealing with the safety of journalists and issues of immunity, should be advocated in direct dialogue with Judiciary and Security agencies in Puntland, in that context this project is expected to establish a platform for dialogue between the Puntland Media, Judiciary & the government security agencies – that will in turn as results from these discussions create an atmosphere of continued collaboration(s) between security agencies and institutions in Puntland State.

Ahead of the MAP next General Assembly that will elect new board, expected to be held Mid December – FPU generous support through this project will be partially supporting capacity building activities in kind of institutional development covering the consultancy fees for the reviewal of the MAP bylaws and the MAP Financial FY2016/17 independent auditor’s recommended policies and procedures that need to be improved. In addition to that, the MAP will give special attention and promote female journalists’ participation in the MAP GA and encourage them to contest the MAP board leadership positions.

‘Getting Away With Murder’ In Somalia, Where Journalists Are Killed With Impunity

According to the CPJ’s 2017 impunity index report, in the past decade alone, 26 Somali Journalists have been murdered with complete impunity. The report indicates that the killed Journalists were covering politics, culture, and war – while the perpetrators behind the slaughter were Al Shabab radical group and government officials.

”Threatening and punishing journalists can be lucrative for political figures who want to “control the narrative,” said CPJ’s Radsch. “It’s not surprising in a country like Somalia where there are so many warring factions, ” Radsch said. “They want to control the narrative, or cover up their own corruption, or gain political power. Journalists often stand in the way of that, or uncover uncomfortable revelations.”

MAP envisages strengthened governance in Puntland and for Somalia a peaceful, democratic and a well-developed state order where there’s an enabling environment for free, fair and safe atmosphere for journalism practice with the efficient and effective management of public and community affairs to the best interest of the citizen of the country.