Home » Puntland: MAP Calls for Peace and Respect for Sacredness of Human Life amid tensions in Sool Region. 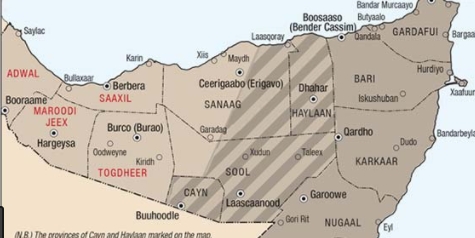 The Media Association of Puntland (MAP) the umbrella body of Journalists and Media outlets in Puntland, is calling for a de-escalation of tensions between the Puntland and Somaliland authorities, following the armed clashes on January 8, 2018 when Somaliland troop’s attacked Puntland forces positioned at the Sool region’s Tukaraq town, situated 86km north of the Puntland administrative capital, Garowe.
Since then, a significant observation that has potential to cause violence have been in the climax especially focused on military buildups from both warring sides that may lead to possible armed clash and emit into mass civil ruin.

MAP chair in a statement calling for peace said ‘’We call on authorities of Somaliland and Puntland to cease the ongoing interventions that clearly incite armed confrontation, we should not allow more loss of human lives from both sides, we believe there are more peaceful means to resolve the dispute’’ Said– Mohamed Dahir Warsame.

On another note, Media Association of Puntland deplores all types of volatile inspiring speeches and or broadcasts published online and offline by both sides state media outlets, additionally, individual journalists have also contributed negatively with provocative posts and articles published on Social media.
In any given country across the globe, Journalists and editors reporting on/from conflicts settings face enormous pressure from different actors to take sides, however, Journalists must not take sides at any costs, they should uphold a strategic distance from hate discourse and inflammatory coverage.

MAP warns Journalists on taking sides and avoid any attempts that could compromise their Professional ethics in reporting, the association notifies the individual journalists and media organizations to put their act together and maintain high ethical standards both at the workplace as well as their interactions and contents they post on their social media pages.

Mohamed Dahir, MAP chair clearly noted that a continuation of unethical practices by memberships holders of MAP may lead to the termination of membership.
MAP chair said ‘’It is extremely unethical and a shame to see journalists posting inflammatory messages on their online social pages, we remind you that MAP will not tolerate this kind of unprofessional act of indecent behaviors that misleads the public and undermines the integrity and the role of media in the society, it must stop immediately” He added ‘’ the continuation of such provocative expressions by MAP membership holders will lead to severe consequences including the cancellation of the membership, which also includes benefits of training and various privileges, as stated on the MAP by-law, Said Mohamed Dahir

Journalists, institutions and Media outlets that seek to maintain their membership with MAP must maintain high ethical standards and must not behave in such obnoxious manner and yet claim to be professional journalist serving his or her society.

On a final note, we invite the civil society groups and the international community to join us in calling for peace, calmness, respect to the sacredness of human life and stability, especially on the current tensions in Sool region.