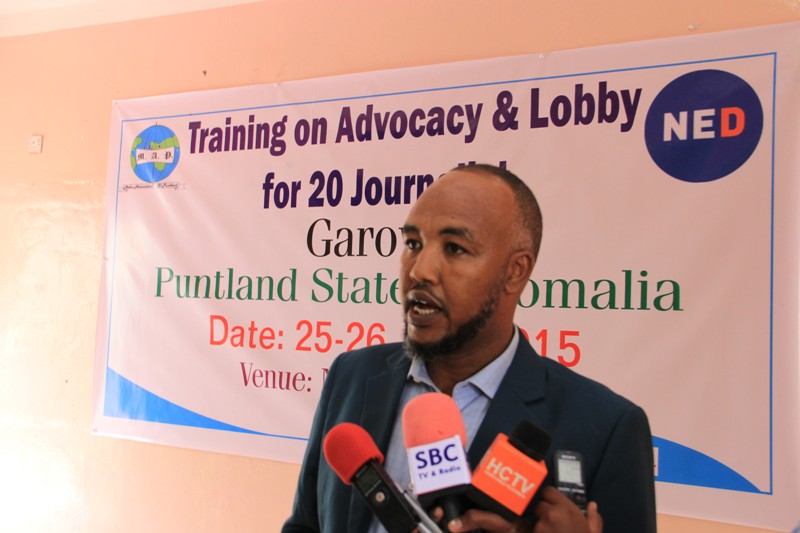 Garowe,Puntland,Somalia 25th July 2015:- Media Association of Puntland (MAP) has proceeded to the official launching ceremony of the project of Promoting Media Sustainability with a 2-day workshop on advocacy and lobby which has attracted about 20 local journalists in Puntland state capital, Garowe on Thursday 25th July.

This project being funded by National Endowment for Democracy (NED) will focus on key issues including conducting media trainings, media stakeholder meetings, advocacy workshops and a non-fiction writing workshop as part of its effort to improve the capacity of the sector and promote freedom of expression in Punt land.

The first workshop of the project was officially launched by MAP chairman Faisal Khalif in a colorful event attended by members of the public including former BBC Somali journalist and the current chairman of  Puntland Non-State Actors Association (PUNSAA) Nur Shire Osman,

Faisal Khalif, “We are delighted to launch this new project funded by NED which will enhance the capacity of journalists in advocacy and initiatives of targeting the office of president and parliament against governments proposed restrictive draft media law as the law progresses towards enactment”.

Mohamed Dahir, MAP’s Head of training department indicates the advantages of such trainings which will elevate the professional skills of the journalists especially in their day-to-day tasks and the general media interests – “from a journalistic campaigner point of view”.