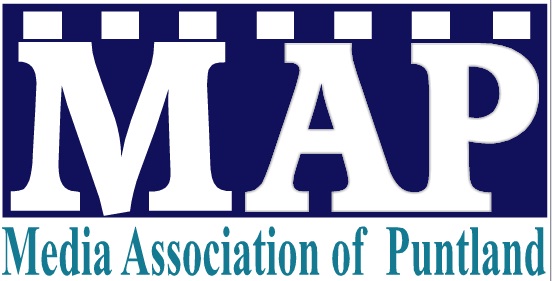 Garowe,Puntland,Somalia: 21st July 2015:- The Media Association of Puntland (MAP) condemns in the strongest terms possible the clobbering and torture of three journalists by Puntland presidential unit on Sunday afternoon in Somalia’s central town of Galkacyo airport.

The trio who were filming the departure of Somali Prime Minister Omar Abdirashid Ali Sharmake from Galkacyo airport were fired twice by the soldiers who declined them to make their way in to the airport.

Said Nadara, head of London-based Universal TV,  Somali Channel correspondent in Mudug region Mohamed Abdiaziz and Iman Mohamed, a writer for Rahanreb website are said to have sustained injuries after being beaten and flogged on the ground while their cameras were damaged as the soldiers kicked.

Director of Radio Galkacyo Awil Mohamud said the journalists had been treated in a clinic and later discharged, adding that their condition is stable and improving. He confirmed the journalists’ cameras were badly damaged.

Chairman of Media Association of Puntland (MAP) Faisal Khalif said the Puntland State House’s special unit must stop forthwith acts of repression directed at the journalists. “Perpetrators of this awful act which is a part of human rights violations must be brought to book”. He noted

He said the government must apologize and take full responsibility for the wrath unleashed on the journalists, including compensating them for the injuries inflicted plus damages to their cameras.

This is the latest in a string of violence against press freedom in the war-torn horn of African nation.