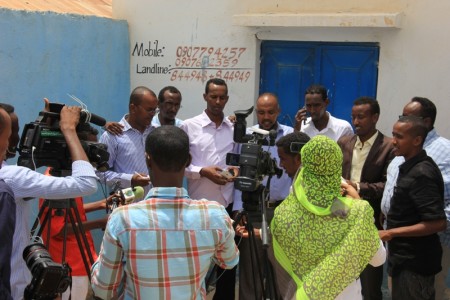 Garowe, 23rd May 2015:- Media Association of Puntland (MAP) condemns the arbitrary arrest of two radio Daljir journalists on Saturday morning by the Puntland police in the regional capital, Garowe in the strongest terms, the latest in a string of violence against journalists in Puntland.

The incident becomes the third in this week, Wednesday 20th May 2015, the Somali National Television station office in Puntland port city of Bosaso was shutdown and arrest of its journalist in the town though the journalist was later freed and ban against TV lifted.

On 21st May 2015, Media Association of Puntland learnt  that president of Puntland has ordered arrest  warrant of Jama Deperani, London-based Somali Channel journalist who has been accused of making posts that angered president Abdiweli Gas’s administration on his Facebook page.

The case against Jama Deperani was later dropped following negotiations between the organization and Puntland Information ministry.

MAP calls the move by Puntland government a deliberate obstruction to the freedom of expression and intimidation, calling for their unconditional release.

“Journalists are citizens and are entitled to report on issues worth reporting without being harassed”, states Khalif

This is one of the latest of a wave of violations against press freedom in the war-ravaged horn of African county.