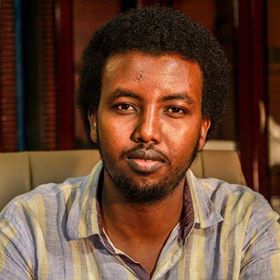 Garowe, Puntland: The Media Association of Puntland (MAP) condemns the recent arrest of online journalist Ahmed Ali Kilwe. The Journalist who is under illegal imprisonment was arrested on the July 02, 2017, by the Puntland counterterrorism police after receiving a directive from the Puntland President on allegations of “posting articles impertinent to the Puntland President,” according to officials from Puntland security and the Puntland Ministry of information  that MAP members met.

Furthermore, Ahmed Ali Kilwe was first detained in a station located at the southern side of Garowe’s main entrance checkpoint for vehicles arriving from Galkaio route. He was then later transferred to Garowe’s central prison on July 5, 2017.

MAP team has met with the deputy Puntland minister for information, culture and Heritage Abdirizak sheikh on the July 3, 2017 and the Puntland counterterrorism chief. Both officials have in the separate meetings informed the MAP team that Kilwe was arrested through the commands of the Puntland President, hence they have no responsibility of his arrest nor capacity in responding to the MAP’s demand of releasing Ahmed Ali Kilwe.

The Media Association of Puntland (MAP)  has been extremely disturbed by the actions of the Puntland authorities on undermining legal procedures of arrest. The glaring evidence that free Speech is threatened in Puntland is the head of state Mr. Abdiweli Ali’s arbitrary use of the police to restrict freedom of expression and free media in the arrest and transfer of Ahmed Ali Kilwe to central prison, while bypassing merit legal procedures of warrant and arrest.

”it is not the first time that the Puntland authorities have offensively used power to arrest a journalist, in all similar previous cases journalists were arrested by the security with orders from top state officials”, adding ”we have always called the Puntland authorities to practice and respect of the Puntland constitutional provision on freedom of expression but seems the authorities have repeatedly ignored our calls” said Mohamed Mohamud ”Welcome”, the Media Association of Puntland vice chairperson while giving an interview to the USA based Voice of America (VOA) on the July 6, 2017.

There are better and more civilized ways of dealing with such cases than arresting and detaining journalists, for instance, the Puntland authorities could have filed a case and bring Ahmed Kilwe to court.

‘’The act of the security forces to arrest him shows the intolerance towards criticism and is against the rule of law and the right to freedom of expression,’’ said Omar Mohamed, MAP’s Communication and Advocacy Director.

Elsewhere media practitioners have come out in numbers condemning the arrest of Kilwe and have called for the Puntland authorities on the immediate release of the Journalist. Journalists have also expressed and cautioned the Government’s harsh actions against the journalist just because of expressing his views on the Puntland President.