Home » #Puntland: MAP convenes a multi-stakeholder’s conference on Safety of journalists and issues of impunity. 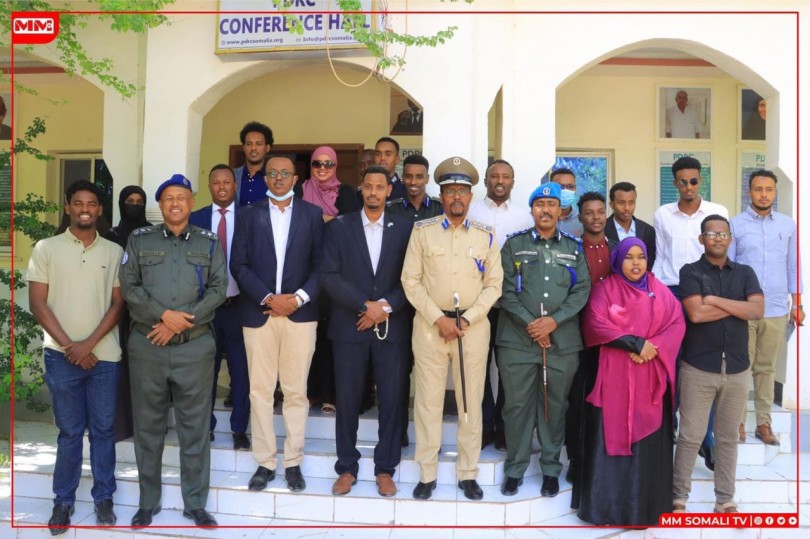 In pursuit to the MAP’s thematic focus on defending the rights of local journalists and promoting their safety and protection through dialogue, the Media Association of Puntland (MAP) in collaboration with its partner the International media support (IMS) convened in Garowe yesterday a state level multi-stakeholder conference organized with support from SIDA and EU under the “Opening Civic and Democratic Space: Civil Society and Media Together” project.

The dialogue forum brought together top law-enforcement officials led by Puntland’s police commissioner General Mohamed Ali Hashi, members of the civil society groups, officials from the OPHRD, media executives and independent law practitioners who engaged in a constructive debate on issues of safety and impunity of journalists’ violation.

MAP’s chair welcomed participants and thanked the newly appointed Police commissioner for accepting the invitation to the conference on a short notice. The chair gave a brief background on the media law-enforcement dialogue forum and what MAP intends to achieve.

At first, the chair noted that the conference is part of the MAP strategy corresponding to it’s thematic focus aimed at promoting the safety of local journalist and protecting their rights. He added that this will be the seventh of its kind held yearly basis since 2018.

‘’Today we gather here to continue our quest for an enabling environment for media practice in Puntland. General Hashi, thank you for joining us for the very first time since you took charge. Somalia is headed to a national elections and as we know the political tensions are high and we are concerned on the safety of our colleagues reporting on the elections…

We have already seen the government wrongfully block media outlets from holding public interests events related to national elections due to political reasons, we have also seen incidents in which journalists are arrested unlawfully just because a politician is not happy with the news-coverage – both actions are a direct violation to the Puntland media law and a deliberate back-stab to the constitutionally protected freedom of expression…

Through this meeting we aim to present our concerns on behalf of the media and get a solid cooperation through action points with law-enforcement committing on respecting and promoting the rights of journalists’’ Said Chair Dahir, in his opening remarks.

Puntland’s police commissioner in his opening remarks talked on the importance of the media in the society. He also put a comparison on the service provided to the society by the media and the law enforcement, calling both institutions as the most important service providers to the society. The commissioner highlighted that a major concern of the police being the difficulties on differentiating who is a practicing journalist and or a social media user who takes pictures and posts to his/her page with unethical content.

‘’this days it is difficult to tell who is a journalists, the fact that anyone can just easily take a picture and post to social media with misleading contents lessens the credibility of the mainstream media’s work. The fact that there is no formal registration for practicing journalists is a problem, I call on the Puntland media council to finalize the accreditation of journalists’’ Said Gen. Hashi, Puntland’s police boss in his opening remarks.

The event was then officially opened with the remarks from the chief-guest-of honor, Moham2ed Isse Osman, Director General of Puntland’s Ministry of Information who also spoke on the importance of the conference and urged both sides to come-up with effective cooperation strategies in the public interest.

During the conference, MAP presented recent cases in which it called ‘’violations committed against the media/journalists 2021’’ and the chilling effect it sends to the rest of the Puntland media. Among the cases was 84-day held journalist Kilwe and the incident of gov’t blocking of radio Daljir public forum on national elections. Media executives also spoke on other existing concerns surrounding the safety of their staff.

The police pushed some of the cases as a responsibility of the judiciary, meanwhile they also raised the concern of not knowing who is a legit journalists. The police on unethical reporting pointed to social media posts with contents clearly citing social unrest although they couldn’t verify whether it was posted by a journalist or a citizen.

On another note they however disagreed on the allegations of the prolonged pre-trail detention despite the proof brought by MAP.
Participants agreed on the following action points for the short term;
a. Puntland Media council to accelerate the accreditation process of journalists;
b. Police to organize events sensitizing their members on the importance media’s work and freedom of expression;
c. MAP to engage the Puntland judiciary to tackle issues surrounding pre-trail detention of its members, among others; and
d. MAP to continue ethical journalism capacity building for journalists

MAP secretariat will continue to engage the Puntland’s Law-enforcement commissioner to ensure that the action points are effectively implemented.