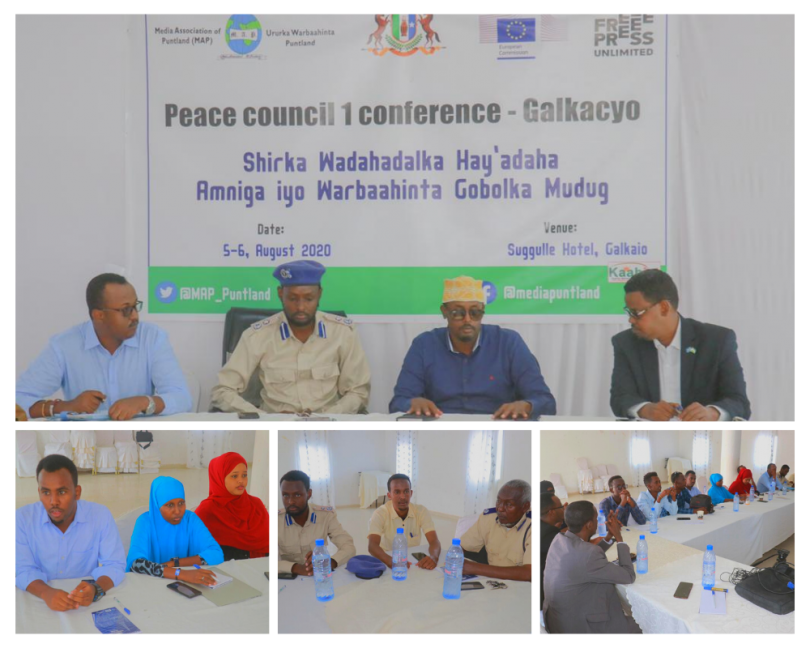 Galkaio City, August 11: The Media Association of Puntland (MAP) held from August 5-6, 2020 in Galkaio city peace council conference, marking the fifth conference of it’s kind to be launched in Puntland since the initiative was first established back in 2018. The initiative “Peace Council” supported by European Union (EU) through Free Press Unlimited (FPU) is a media & security stakeholder’s dialogue forum that aims to promote the safety and protection of journalists and combat issues of impunity on crimes committed against journalists.

Galkaio the regional capital of the Mudug region has been among the perilous Somalia’s towns for media practice. Over the years, Journalists working in Galkaio have been victims of murder, arbitral arrests, physical assaults, intimidation and harassments perpetrated by authorities, business persons and terrorist groups. The last unresolved murder in Galkaio city was the late Journalist Abdirizak Saed Osman, a photo journalist working with the Galkaio’s radio ”Codka Nabada” who was murdered by unknown thugs back in September 2018.

The objective of this two-day forum was aimed at initiating dialogue between Media and security stakeholders, raise awareness on the harsh environment in which Galkaio city and Mudug’s region Journalists operate, and search of a common ground to address the protection, safety of journalists and issues of impunity.

MAP chair who welcomed the participants and gave an overview of the conference objective said:

‘’This is the first time MAP has organized a media-law enforcement meeting in Galkaio, however we have implemented similar conferences in other cities such as Bosaso and Garowe. Adding, Through this meeting we intend to engage authorities on important issues surrounding the safety and protection of journalists, the forum seeks to flesh-out the root-causes on all crimes committed against the journalists and as result we intend to commit on certain action plans to aimed at establishing an enabling environment for media practice,

I would like to thank you all for accepting our invitation to this vital dialogue and hopefully we will altogether have fruitful discussions that will open doors for a conducive workable atmoshpere in which Mudug region’s journalist could operate, said Mohamed Dahir Warsame.

Mudug’s Deputy Police commissioner col. Abdi Saed Hussein at his inaugural speech welcomed the media-security dialogue forum calling it a much needed initiatives that should have occurred earlier than now. He also pledged in his capacity to contribute in promoting the safety and protection of local journalists.

He said , ‘’I personally have been searching for such opportunity to convey our concerns, I believe once we come together in such a manner we can clear out a lot of issues and improve our professional working relations’’ said Col. Abdi Saed Hussein, Mudug’s deputy police commissioner

Galkaio’s Mayor, Saahid Mohamud Ali who spoke also at the opening session noted the importance of having dialogue between the police and the media. Saahid underlined that both police and the media are important components of the society, their cooperation will benefit the public. He urged the participants to have constructive discussions and reach consensus while respecting each side’s responsibility.

Engineer Mohamed Isse, Director General of the Ministry of Information who officially opened the conference, spoke on a wide-range of points including what he called the Ministry’s top priority being the development of the media practitioner’s capacity as well as ‘’promoting media access of information’’ by facilitating the journalists with data  needs throughout the Puntland state institutions.

Eng. Isse also mentioned an ongoing cooperation between MAP and the Ministry information on establishing the Puntland Access to information act and how important this act will be for the advancement of good governance, government accountability and to the public’s right to the Puntland’s State information. Closing his remarks, Director General also thanked MAP for organizing the peace council and called for all parties involved to be solution focused and wished the participants a successful ending.

Galkaio’s Mayor, Saahid Mohamud Ali who also spoke at the opening session noted the importance of having dialogue between the police and the media. He also pointed on the key points of the agenda such as the module on Puntland and Somalia’s legal frameworks safeguarding freedom of expression and the role of the media, noting that it is important to also understand what the laws say about the media’s work and freedom of expression at large. Saahid finally called for more similar dialogue meetings in the future while citing a Somali proverb that goes ‘’aan wada hadalno waa aan heshiino’’ meaning ”lets have dialogue means let’s agree”.

In the course of the 2-day period, the conference facilitator Mohamed Hajji Bashir led the proceedings and gave presentation on the topics of Best practices addressing the detention of Journalists, the concept of press freedom with focus on international and national legal frameworks, Puntland’s constitution safeguarding freedom expression and media independence, and arbitrary detention of journalists and due process, among others.

During the discussion session in which participants shared their stories, concerns and cases recounting moments when journalists got into trouble, a major concern raised by the media participants was the issues of trust when it comes to reporting sensitive involving ”journalists in danger” cases to the police due to past mishandled cases. In addition to that, several occasions in which police used forceful action against reporters were also shared concerned by the participants with some instances resulting to injuries, and destroying/confiscation of media property.

On the last day of the conference August 6, 2020, an action plan to lay foundation for future cooperation which works towards improving the safety and protection of journalists was put forward:

The Media Association of Puntland (MAP) will be presenting the outcomes of the conference to an upcoming state level Peace Council Conference that is scheduled for November 2020. The Galkaio conference was a good start but will require a close follow-up on the consensus reached.