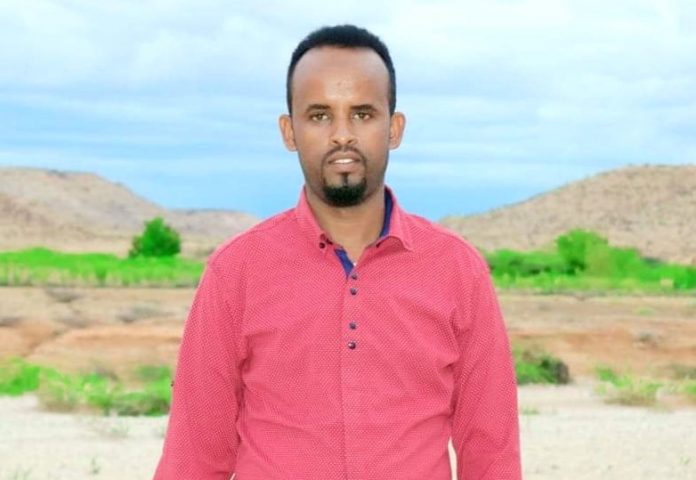 Garowe, Friday 18: The Media Association of Puntland emphatically condemns the 3-year sentencing of journalist Kilwe Farah Adan by the Puntland military Supreme Court on March 17, 2021 in Garowe, the administrative capitol of the Puntland State of Somalia.

‘Today’s ruling is not only prejudicial and inconsistent, but it also proves that the Puntland government has finally dropped the invention of caring about press freedom, chose to surpass boundaries and threaten democracy and public debate. Puntland authorities in should immediately release Journalist Kilwe, drop the charges against him, pay for the physical and psychological damages caused and cease harassing the media.” Said Mohamed Dahir Warsame. chair MAP, speaking to the association’s information desk. 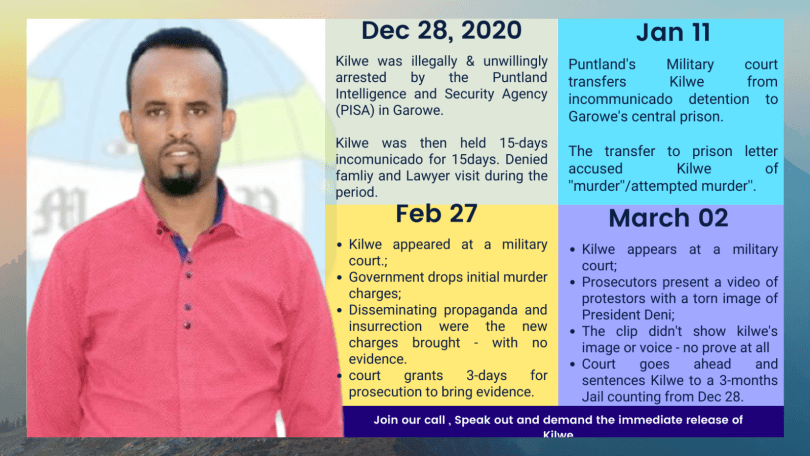 March 03, Garowe’s first instance court handed a 3-months jail time that was according to the verdict was to be counted from December 28 – basically Kilwe was to be released March 06 – however authorities weren’t satisfied with the 81days punishment but appealed their own fabricated verdict – and on March 17 at the absence any type of legal representation for the defendant – military supreme court sentenced our colleague to 3-years.

‘’no rocket science needed to see how shamefully the Puntland military courts are committing these horrible violations, any healthy thinking brain could ask what did Kilwe do between March 03 to 17 – the answer is simple kilwe didn’t commit any crimes and in several occasions prosecutors have failed to bring evidence, but is a victim of an authoritarian resembling government that doesn’t care of media’s work and public’s right to information and afraid of critical reporting that expose government malpractices, PERIOD’’ Said MAP chair, Mohamed Dahir Warsame.

Violations against journalists and media workers are a routine occurrence in Puntland the last 4-months 5 journalists kilwe included were victims of government arbitrary arrest due to posts they published on the Facebook pages. MAP managed to secure the freedom of 4 journalists and has put an all out concerted efforts in place to get Kilwe Farah Adan but is yet to achieve.

MAP in several occasions has called on Puntland authorities to halt these continued intimidation tactics aimed at silencing the free press, but feedback shows that the state administration is comfortable to the continuation of gagging the independent media and weaponizing the justice system against the journalists.

Where are the perpetrators who slaughtered the Journalists Jamal Farah Adan 2021 and Abdirizak Saed Osman 2018, both murdered in Galkaio city a result of their journalism profession.

”Puntland gov’t should stop wasting time and resources on decent voices who inform the public whether critical reporting or not, but should rather emphasize and commit themselves to the safety and security of the public, journalists included”, said MAP chair, Dahir, who also called for a thorough and immediate investigation into the murder of journalists in Puntland.

Suddenly, the Puntland President is well aware of MAP’s calling and the urgency in protecting the safety of journalists and promoting the freedom of expression – MAP chair and the President Deni last met on on February 03 in which the President pledged to address the outrages expressed by MAP.

President Deni, has not been supportive to defending the rights of journalists, promoting freedom of expression and to just, free and fair trial – but has been silently watching the enormous punishments’ the journalists are undergoing.

”Mr. President we are disappointed with your lack of action on our call to promote freedom of expression and to cease the atrocities in which your administration is committing against the free press, despite your pledge – history will not be kind to you – the public and the world are watching too on what you say and what you do”

The Media Association of Puntland will not sit-back and watch this horror movie in which its members suffer enormous damages caused by state and non state actors.
MAP is also disappointed that the Somali grassroots or activists & the international community on their silence on the damages being caused to democracy in Puntland at a time where the society very much needs free and unbiased reporting.

The currently ongoing national conference in Mogadishu being attended by federal and state heads, and Presidential candidates – in which the issues surrounding freedom of expression, Journalist safety and public’s right to information are not among the key priority points in their agendas but rather a side-note, if any.

”Those setting the agenda at the national conferences must put the urgency in promoting the safety of journalists by installing a realistic government-CSO led safety mechanism to protect journalists in Somalia and promotion of freedom of expression as a top priority, adding, only when politicians acknowledge the importance of a free press and importance of respecting diverse opinions is only when Somalia could be considered being on the right path, Said Chair Mohamed Dahir.

MAP chair, in a presser on Thursday 18, also urged the Puntland Media to unite in fighting against these state-led violations and call out the military court’s malpractices. He also urged the media to not get intimidated and continue their work without fear.

On a final note, the Puntland media is under a constant attack and will not be silenced, the coming weeks are critical and MAP will be holding a state wide protests demanding the immediate and unconditional release of journalist kilwe.

To all individuals and institutions who are touched by the violations and are gatekeepers for democracy and free press, we welcome you to join our next move to save democracy in Puntland. Your efforts are most needed, don’t sit back reach us through chair@mediapuntland.org.