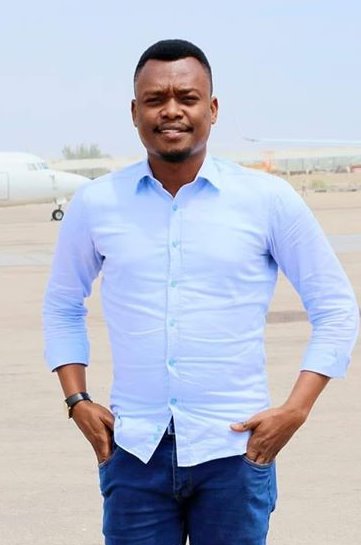 Garowe, February 17, 2020: The Media Association of Puntland – MAP – welcomed on Saturday the Puntland’s Prosecutors’ decision to drop the investigation into the case against Journalists Omar Mohamed Soomane on February 15th, 2020.

Initially, the troubles started when news-reports produced by Soomane, broadcasted in Kulmiye News Network capturing a topic related to the aim of an exam Puntland Students sat for in Mogadishu early this year. Students who flew from Bosaso city to Mogadishu were invited to participate in an exam that would determine their luck to earn a Turkish scholarship. Soomane’s version read ”the students were taking the exams to earn the Somalia’s national education certificate”.

To correct the mistakes – Soomane on February 04,  in a Facebook post admitted to inaccuracies in his reporting and publicly apologized. However, the confessions weren’t enough to keep him safe, instead he lost his job as a journalist serving in the Puntland’s President media crew and was later arrested.

He was arrested and held 14hours in the Garowe central police station on the February 5th and was released next-day on bail following an instantaneous intervention by the Puntland’s media guild MAP.

‘’It is disheartening to see the harsh reactions from government towards Journalist Soomane despite his public apology, adding, mistakes are common in human nature and apologies that correct the record in the inaccuracies should have been enough to allow Soomane continues his work’’ Said MAP chair Mohamed Dahir in a statement minutes after bailing out the journalist from the Garowe police station.

To ensure that Soomane was well equipped legally, MAP with legal fund support from the Free Press Unlimited (FPU) hired a defense lawyer to counter the government launched 7-day investigation aimed at building a legal case against the defendant (Soomane).

After 7+ days in which the MAP defense team kept intense pressure on the government prosecutors, Saturday February 15th authorities decided to drop the case and to not bring charges against the defendant Omar Mohamed Soomane.

‘’I would like to thank our defense lawyer representing the defendant Journalist Soomane for bringing the case to rest, indeed, the decision made by the government prosecutors to drop the case is a welcome move’’ Said MAP chair Mohamed Dahir Warsame who was responding to the decision on Soomane’s Case.

The MAP chair also in a statement posted in the MAP’s Twitter account urged Puntland Journalists to maintain higher ethical standards when performing their duties in informing the Public to avoid getting trapped in pitfalls as a result of inaccuracies in the contents of their news-items. 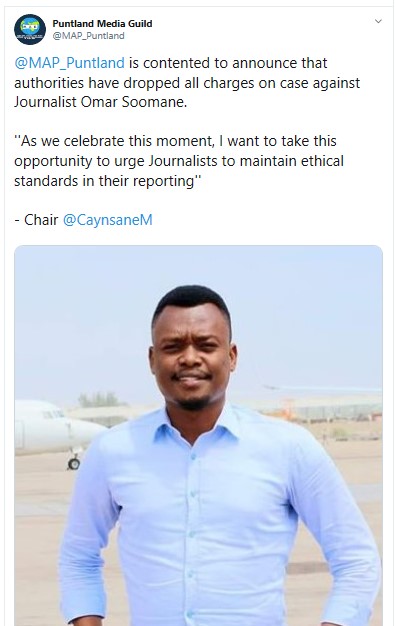 Soomane is among the long-term serving journalists in Puntland who worked 2011-2017 for the UK based Universal TV station in Garowe and later transferred to work for the Universal’s Mogadishu station. While in Mogadishu he also worked with the Kulmiye News Network (KNN).