Garowe, November 26; The Media Association of Puntland (MAP), supported by the Free Press Unlimited (FPU) held a two-day Media and Judicial training for Journalists and Judges from across the Puntland State of Somalia. The training which focused on the topics of International legal frameworks on freedom of expression, Puntland Media law, Puntland Constitution on rights of freedom of expression, opinion – took place from 23 to 24 November at the New Rays Hotel in Garowe.

In number present were 40 participants drawn from the Puntland Judiciary, prosecutors and media executives operating in the Puntland State regions. Seven (7), among them, were female journalists.

The opening of the workshop was chaired by Mr. Mowlid Abukar, Director General of the Puntland Ministry of Information, culture and heritage, at the presence of the Deputy Attorney General Mr. Mohamed Hared Farah, Head of the Office of the Independent Human Rights Defender Mr. Mohamed Yusuf, Deputy chief of the Puntland Supreme Court Mr. Nur Issa Mohamed and the host organization chair Faisal Khalif Barre.

Speaking at the inaugural session of the occasion, MAP chair,  Faisal Khalif welcomed the chief guests, participants and the facilitators for their time and efforts designated to take part of the training.

MAP chair explained the aims of this training to the participants and said; ”we are here today to learn, exchange ideas and uphold the rule of law, review the recent legal bypass on cases brought against journalist and see how best we could reflect in both our constitution, state media law and the international legal framework of freedom of expression”, said khalif

The two-day workshop was aimed at enhancing participants understanding on the international legal framework related to freedom of expression and opinion, the role of legal practitioners in the investigation and prosecution of crimes committed against journalists, as well as the need to reflect on the Puntland constitution and the newly enacted media law (2016) when handling cases related or brought against journalists.

Arbitrary arrests of Journalists – in violation of standard legal conducts of search, summons, and arrest in line with the Somali Penal Law (Xeerka Ciqaabta), and the Somali criminal procedures code (Xeerka Habka Ciqaabta) were rampant from 2015 to 2017. Most of the arrests had been issued through unknown executive oral commands to Police.

At the end of the workshop, Participants agreed to collaborate collectively in promoting the journalist safety and respect to the constitutional rights and the Media law when dealing with cases linked to or against the Media practitioners and outlets in the Puntland State of Somalia.

Participants came up with a joint agreed declaration that pledged to implement an enabling environment for media practice on the legal front and on raising higher ethical standards, see the below links to read the Somali and English versions of the

Find the workshop declaration below in Somali and English languages; 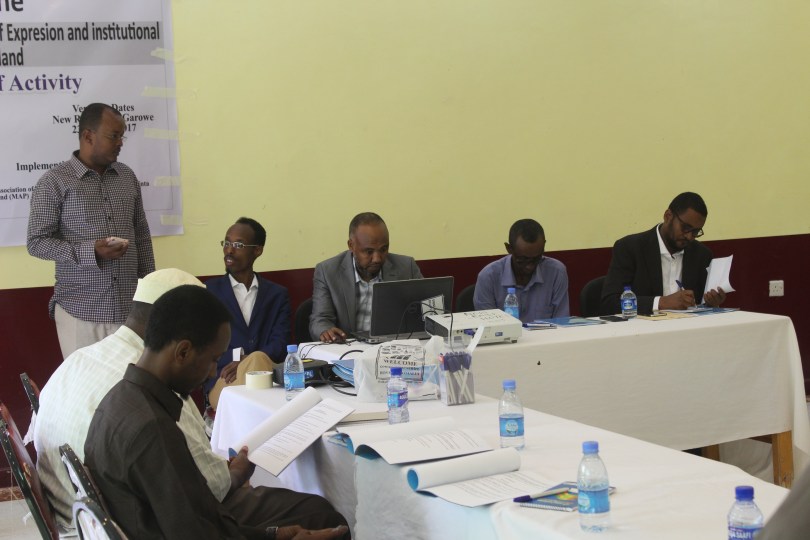